There weren’t much news at today’s Games Day in Köln, Germany, but the t-shirts (featuring a Terminator helmet for staffers and a Tyranid head for the general audience) made it pretty clear that the Mystery Box is the new Space Hulk game.
According to rumors in the BoLS Lounge there will be Blood Angels Terminators in the new game again, which is strongly confirmed by the Games Day cover.
I expect many boarding operations coming up in our local gaming club.
Update: Space Hulk has been officially anounced and is available for preorder on the GW website. Man, those Blood Angels Terminators are so beautifully made that I could cry.  And I feel almost ashamed of my old Terminators that I am currently painting.
Posted by Parcival at 12:03 No comments:

As usual, click the image for a larger view:

My OOP Terminators from the old Space Hulk box painted as the 3rd (pictured above) and 4th Squad of the 1st Blood Angels Company. I didn’t take a picture of the 4th Squad as it really looks just the same.
With the three Terminators from my previous post I have now painted a total of 13 Terminators out of my 25 total. When I am done with the remaining half I will throw all my Terminators and Jump Packers at my enemies in Planet Strike.

Posted by Parcival at 12:03 No comments:

Brother Sergeant Standing Wolf stared at the ruins. The Fallen stood stoically with the electrocuffs around his wrists knowing that any attempt to change his fate had become futile. “Avenger, this is Death Wing One, do you copy?” – “Loud and clear, Death Wing One.” – “We are ready to teleport back into orbit with our freight.” – “Negative, Death Wing One, negative. Teleporting is currently not possible because of a solar storm, Brother Techmarine Rondran is adjusting the signal matrix. Please stand by.” – “Aye, we are standing by. Death Wing One over and out.” Standing Wolf had been watching the horizon for the entire conversation with the ship in orbit because he was expecting someone to arrive. And there he saw them. Red shapes bouncing from the earth as if they were human rubber balls. They were the Blood Angels who originally found a trace of the Fallen when he got too imprudent dealing with his stolen artifacts. The Dark Angels managed to sneak into the orbit and trace the Fallen while the Blood Angels were still busy exchanging formalities with the local authorities. Everything would have been perfect and gone unnoticed. This solar storm really happened at the worst possible moment – one could almost think that Chaos was behind this all. Yet Standing Wolf readied his Storm Bolter for the secret of the Chapter had to be kept at all costs. “Please, God Emperor, please don’t let this happen.”

“Capture the Fallen” Scenario
For this game, we played the homebrew scenario “Capture the Fallen”.
The game is being played over the long table edges.
The terrain is a city fight terrain that provides a lot of cover.
The Fallen is being placed with a Death Wing Squad in a bunker in the center of the table. As long as there is at least one Death Wing Terminator in base contact with the Fallen, the Fallen is captured. If the Fallen is free, he walks 2D6 into a random direction in every movement phase.
The Death Wing wins, if they manage to teleport back into orbit before the game runs out.
The Blood Angels win if the Fallen is still on the surface of the planet when the game runs out.
The Death Wing rolls a D6 at the end of its movement phase. The teleport is successful if the rolled dice beats one of the following conditions:
Turn 1: no roll
Turn 2: 6+
Turn 3: 5+
Turn 4: 4+
Turn 5: 3+
Turn 6: 2+
Turn 7: 1+
The Blood Angels may carry a jammer in a vehicle that worsens the Death Wing roll by -1 if it’s within 12 inches of the Fallen.
Army Lists (2’000 points each)
My Blood Angels list:

Lord Dante moved with his men towards the bunker. Brother Lemartes and his doomed angels had already slipped into it. Dante was looking forward to finally questioning that shadowy character who may know something about the whereabouts of the Amulet of Sanguinius. Suddenly, the screams of the Death Company changed into some supernatural frenzy. They must really have hit a terrifying enemy. Dante landed on top of the bunker and his reflexes placed a clean shot on the giant standing behind it. He didn’t trust his eyes as he saw that he just fell Brother Dreadnought Bethor and all his honorable insignia. Dante rushed down the stair to the bunker’s first floor where the frenzy suddenly had stopped. There was black and bone colored armor all over the floor. “Belial,” Dante hissed, “what treachery is this?” The answer came back in form of a pair of Lightning Claws digging deep into his armor.

Posted by Parcival at 12:04 No comments:

Fresh off the painting table: Triumvirate

I am currently busy painting a total of 25 Blood Angels Terminators. Fresh off the painting table are the three HQ models who are going to be the Triumvirate of my 1st Company. 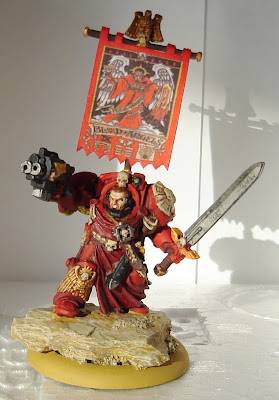 The Terminator Captain has fought many battles and seen all enemies the universe has to offer. He’s the type of guy who arrives with the first wave on the surface of a planet and is the last to be teleported up again. His Storm Bolter and Energy Sword are relatively simple weapons, but he knows to master them well. The more killy weapons are being carried by his Honor Guard who would never let themselves be separated from him. Of course, the Captain would never back away from an enemy, but it’s his Honor Guard taking care of the most imminent threads that lets him lead his company even at the frontline.
I’m especially happy with this picture because it nicely shows the different shade of red between the robe and the Power Armor. 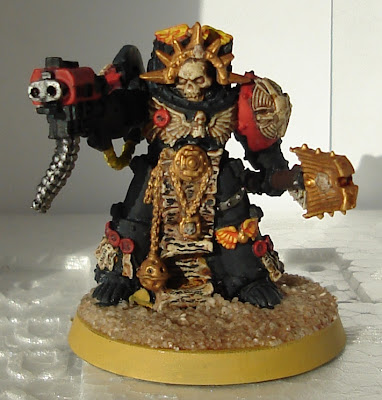 The Terminator Chaplain is the Captain’s dark advisor. The Chaplain knows too well the human beings’ faults and weaknesses, but he also knows their strengths and noble feats. While the Captain may be a great tactician, the Chaplain is the strategist who makes sure that everything going on within the company is in the will of the God Emperor. The Chaplain leads the company in prayer, works as its spiritual adviser and sorts out those who are falling to the Black Rage.
I didn’t paint this Chaplain in any special way. However, I decided to leave the eye sockets in the same bone color as the rest of the skull (quickly thought about black or bright green) because this makes him more ghostly in my eyes. I also decided to glue the halo directly to his head rather than having it sit on the Power Armor because it adds more to the look of a tortured person as well. After all, the Chaplain knows all shades of life and death very well. 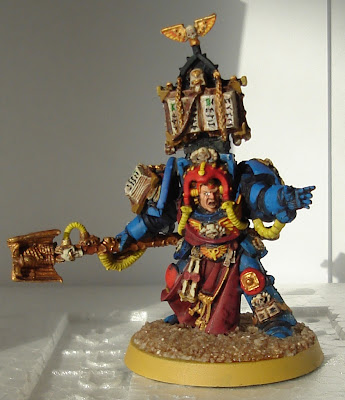 The Terminator Librarian is the keeper of the company’s arcane knowledge and the chief psychic. Whereas the other two characters heavily rely on their cognitive skills, the Librarian explores unknown worlds with his intuition. He channels the ruinous powers from the Warp into forms that help him and his battle brothers in their quest in the name of the God Emperor. He’s a mighty battle mage and both respected as much as feared not only by his enemies – but by his battle brothers, too.
When I was doing the Librarian I just wanted to combine the Librarians’ typical blue Power Armor with my other default colors for the Blood Angels Chapter. With Red, Yellow and Blue he turned out really bright and funky, however. When I look at the model it kinda feels to me as if Papa Smurf is carrying his own mushroom house. However, after a little while I think the funny look is actually quite good. If the Captain is the king and the Chaplain the dark advisor in the background, then the Librarian functions as the jester. The people around him find him rather strange and quite often don’t know what to make out of his words, as he speaks of things nobody else addresses and sees things nobody else can see, but the company’s Captain knows very well that sometimes the Librarian is his only weapon against the most dangerous enemies.
Posted by Parcival at 12:05 No comments: