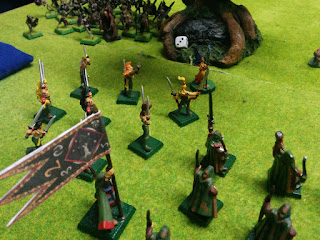 So after a break of 17 years my Wood Elves have marched again into my first game of Age of Sigmar (AoS). I can keep my comment on the new system short by just saying we had a blast. The simplification of the rules makes the game much more fluid and thus entertaining and you quickly start to memorize the most frequent stats.

We had one tweak to the rules, though: every side of the battle had the same amount of wounds. Other than that we played the game "as is". The game was balanced and although one side got tabled, the other was lucky to win.

This game features me (Wood Elves) and LoOn (Vampires) vs. Gabe (Beastmen), Dragonking (Skaven), and Goldark (Orks). The teams were decided by dice rolls.


So in the end, the Alliance between Beastmen, Skaven, and Orkz got tabled because Vampires and Wood Elves could play their best game of marching and firing and roadblocks. Nevertheless, Vampires and Wood Elves were lucky: if for some reason the resummoning of the Varghs (and/or Wolves) had failed, the Wood Elves' archery would have been of very little use in the final rounds of the game.

I'd like to finish this battle report with a brilliant quote by Goldark who remarked on why this game is so much fun:

"In the end, it's just the final percentages that count before the roll of the dice and not how many tables you had to go through to get there." 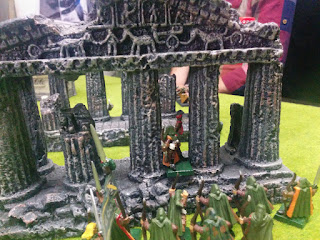 
It was 1992 when I got started on Warhammer Fantasy Battle (WHFB), my first tabletop strategy game. Blood Bowl was the delivery truck that had me and a few friends pick the Empire, High Elves, Dwarfs, and Wood Elves in my case. I played WHFB until 1998 when I figured that I should start being serious about my life. When I got back into the hobby in 2008, my local meta was filled with 40K, so my Wood Elves continued their dormant life. I never felt compelled to unearth them until the release of Age of Sigmar (AoS) when Games Workshop rebooted the entire game and did quite a few things right:

Granted, I haven't played a single game of AoS yet, but the feedback in the local community is promising. Plus I look forward to breathing life into my old models again. They were purchased between 1992 and 1998 and so far I haven't found an unplayable model yet.

The following is an overview of the painted parts of my Wood Elves army. I have virtually no clue  how many points are still sitting in boxes. However, right now I want to get started on AoS as soon as possible.

My plan is to redo my cavalry first while I play AoS using my infantry. 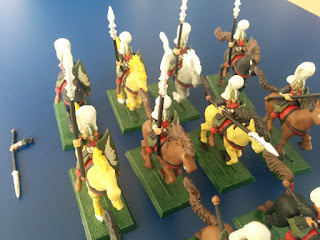 My infantry is what I will use to play AoS until my cavalry is done. Once the cavalry is ready to hit the playing field again, the infantry will be redone piece by piece. 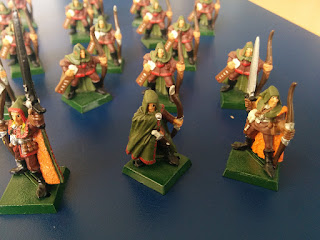 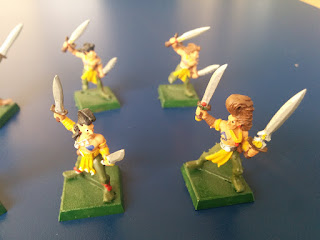 I still got to find my Wood Elves bits box somewhere deep down in my cellar.

Also Games Workshop is hoping for big sales and a huge success from AoS, but I am afraid they won't get that without me. My current budget for miniatures is comparable to what it was when I was a high school student, but these aren't the times anymore when you could get a Forrest Dragon for 45 CHF. Furthermore I still have two moving boxes of unassembled and unpainted Wood Elves, so I have still enough Elves to work on for years to come - and that's the case for every Games Workshop army I own. Not sure how Games Workshop wants to make big profits with me again. However, as long as the rules are free, I'll be definitely motivated to advocate the game by playing it.

Posted by Parcival at 08:57 No comments: