I just finished my Blood Angels Stormravens and I am quite happy with the results. I started to paint up the black Death Company Stormraven in 2011, still in 40K 5th Edition, and after that it sat around in boxes because of my "I don't play 40K anymore and Warmachine instead"-hiatus. Well, 40K 7th Edition sparked my interest again, so I finally had to paint up my Stormraven for my Blood Angels to stylishly ride to battle.

However, before I got started on my DC Stormraven again, I painted a yellow Stormraven red as a warm up exercise. Sven was so nice to gift it to me after he dropped his project of building yellow Space Marines. The red Stormraven bears no insignia other than the Imperial Eagle so I am going to use it for both my Blood Angels as well as my (still loyal) Thousand Sons. 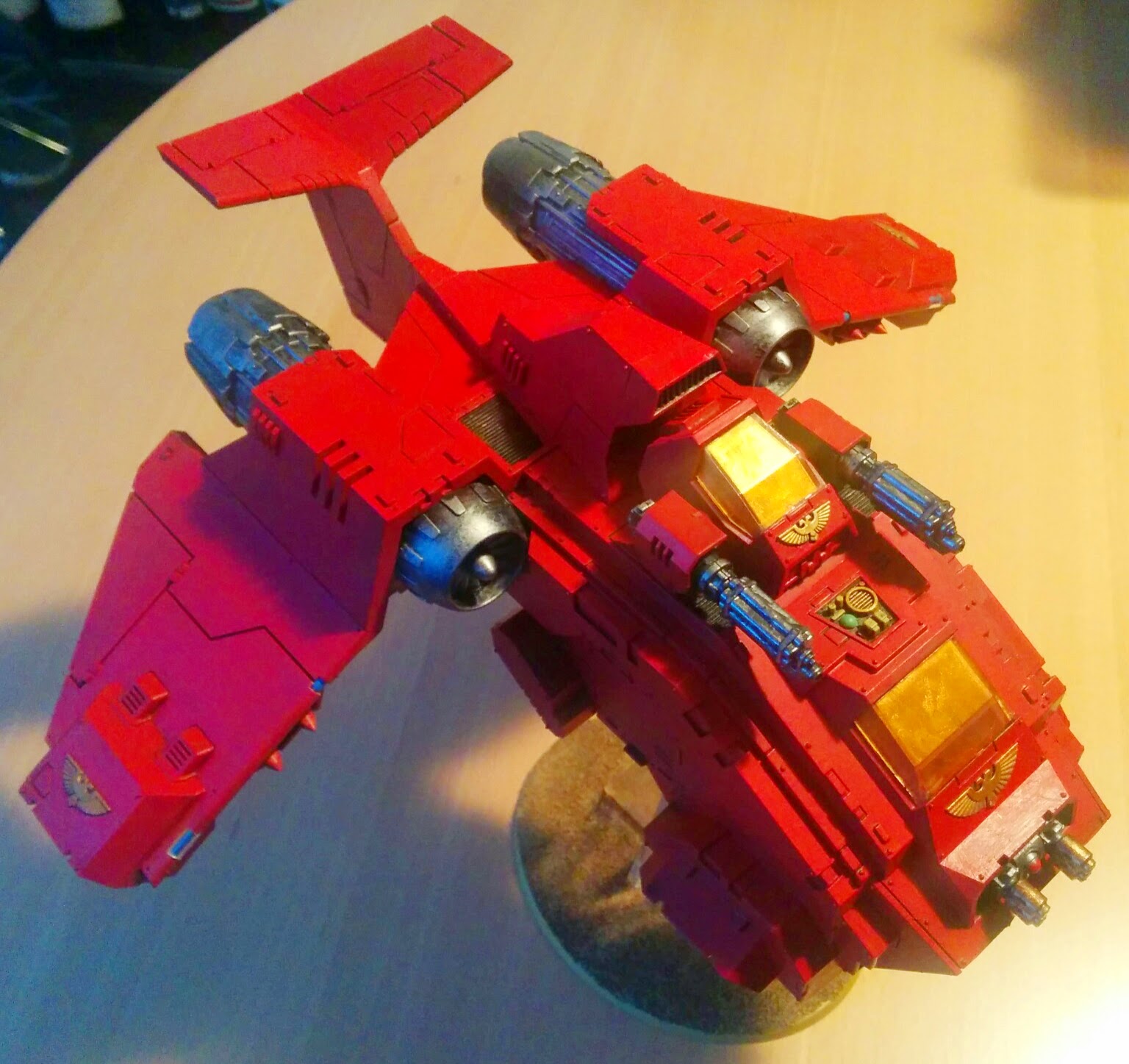 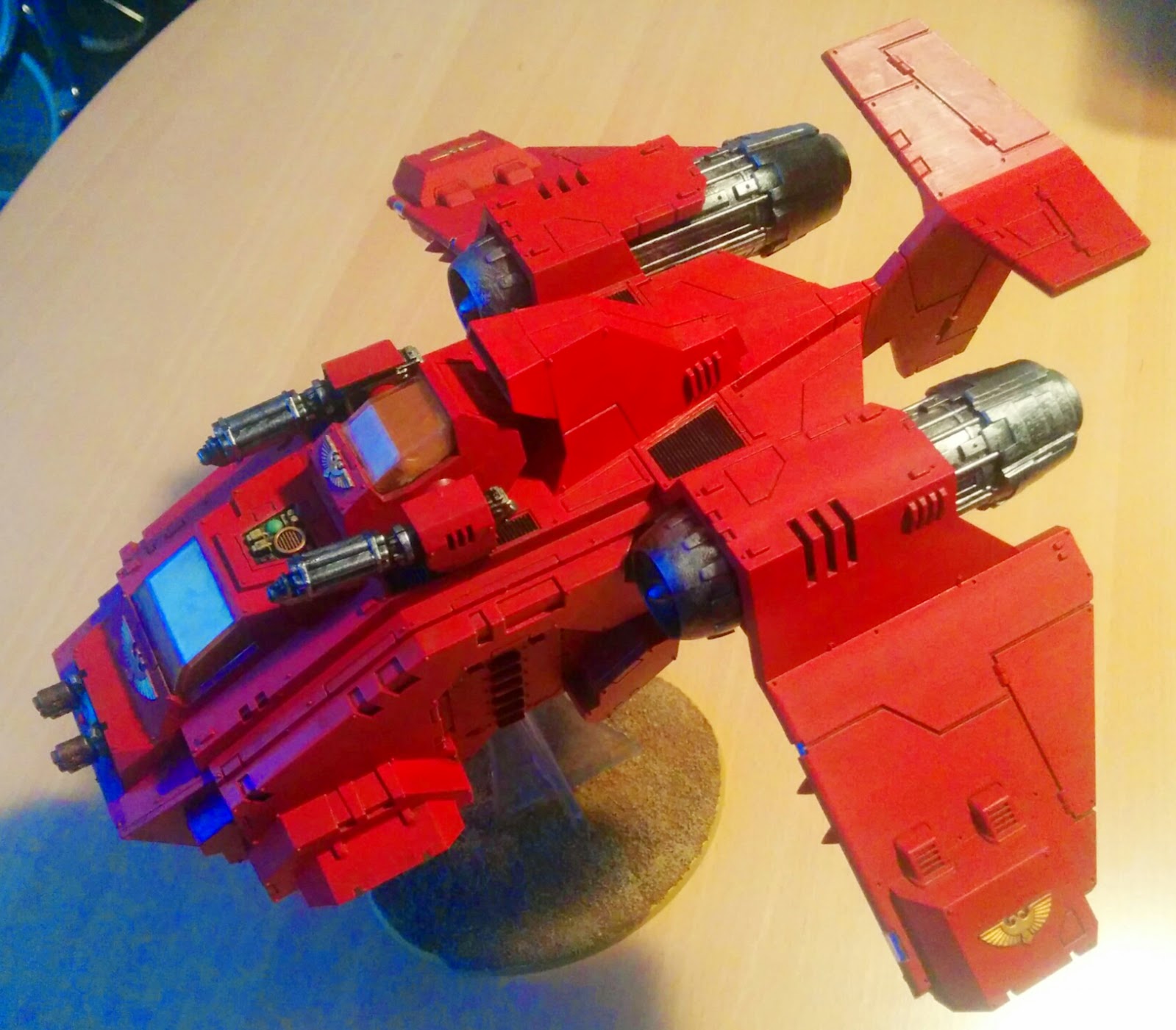 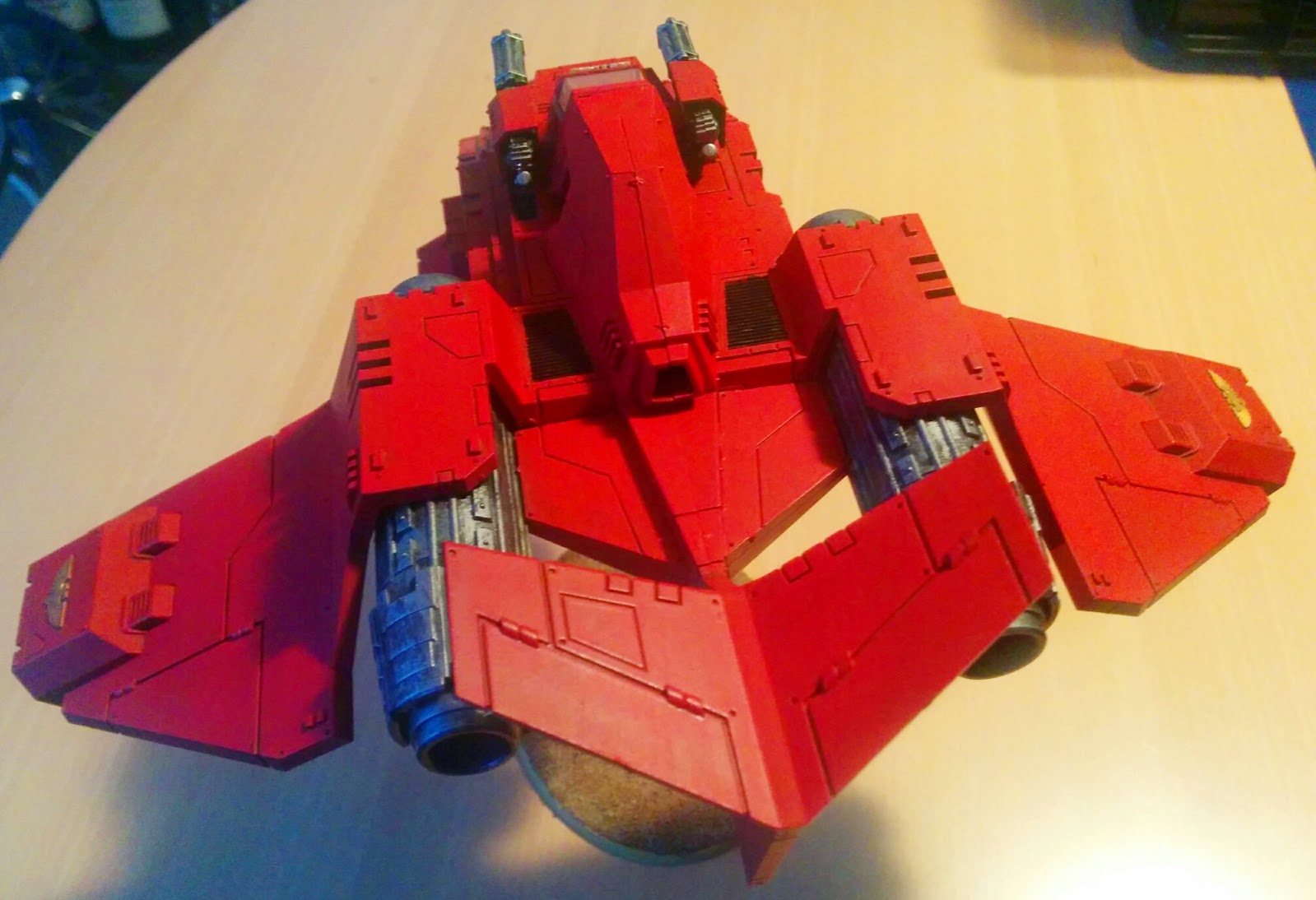 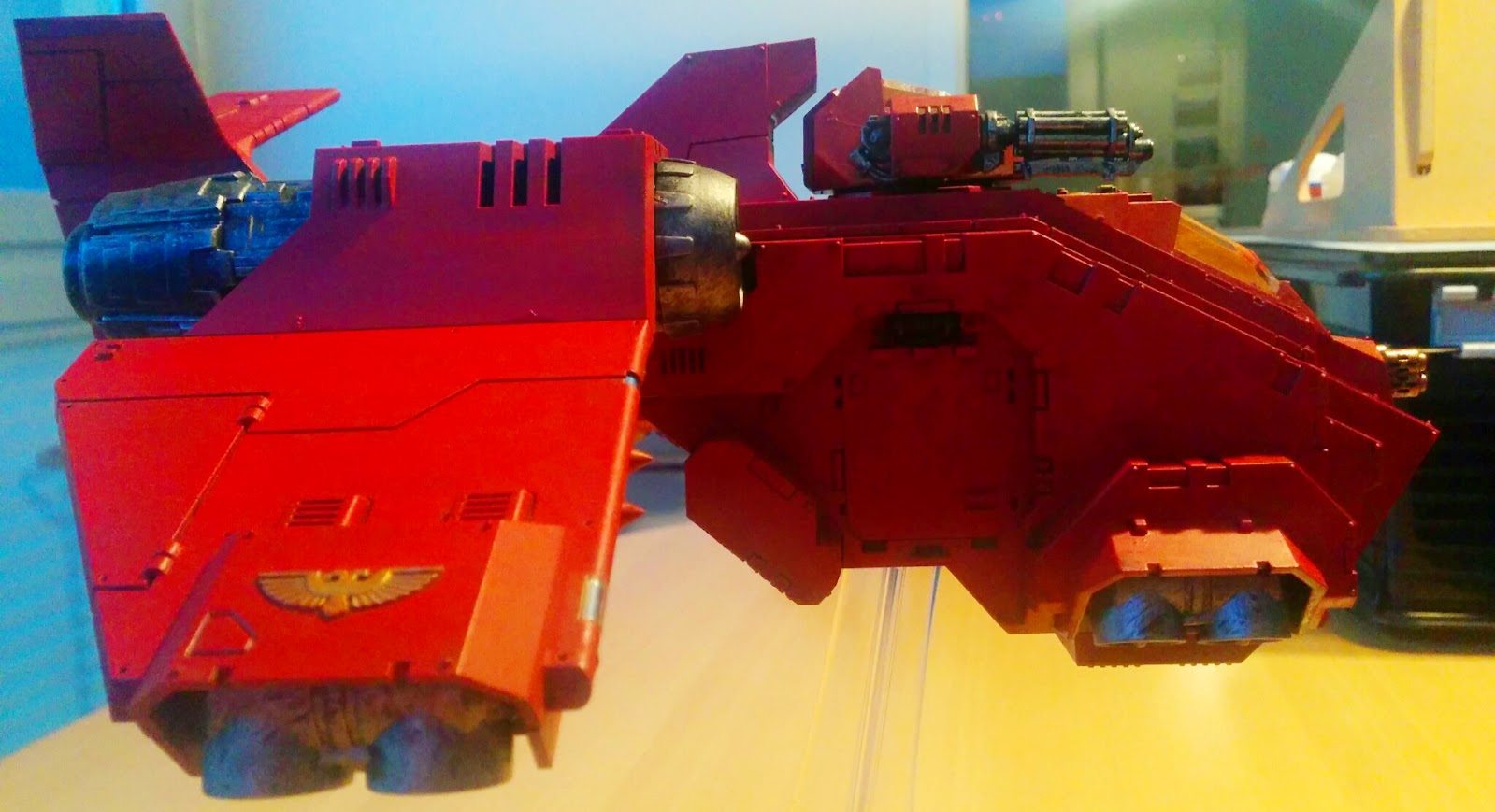 Feeling empowered by the finish of the red Stormraven I moved on for the black one and although one'd think it takes significantly less time (it has been primed black after all), the details still take up quite some time. To my surprise the hardest part was the red crosses on the wings because on the one hand they needed several layers of red to have that lively red color, but on the other hand the paint accumulated near/under the rim of the masking tape for a very ugly border effect. :-/ Right now I just try to ignore it and be happy with the Forgeworld Death Company Rhino Doors instead, which fit perfectly. :-D 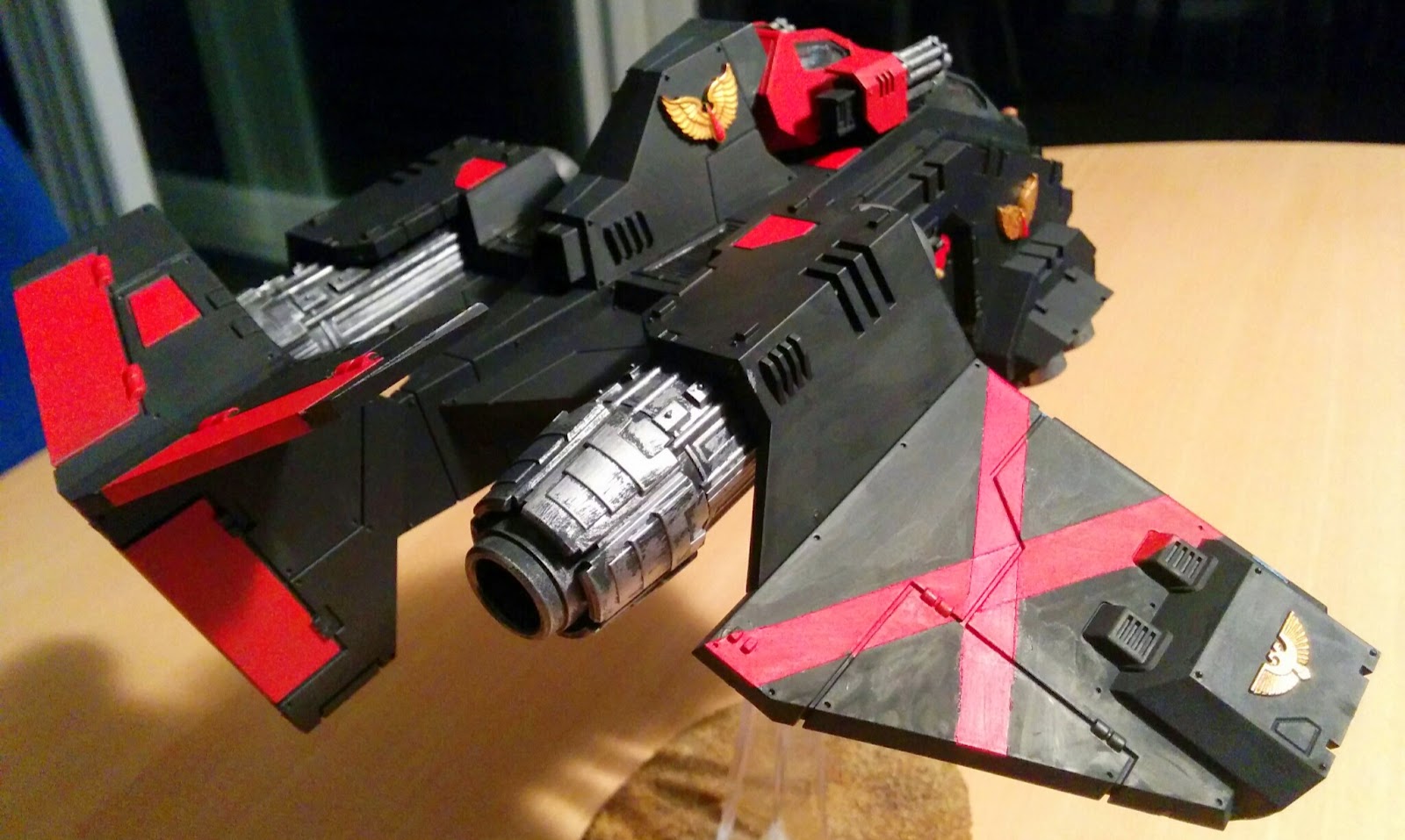 Well, that's it for today. I look forward to playing these babies on a tabletop near you. :-D Plus I have a third Stormraven assembled and a fourth waiting in its box, so depending on my painting priorities I may more or less soon field the corresponding formation with three Stormravens and three Tactical Squads. I just don't know yet if that's suitable for a 1'500pts game.
Posted by Parcival at 11:15 No comments: