Next thing I need is a surface to rest the tiles on as the dinner table proves too small. Also I need terrain, other than a GW wood and a Fortress of Redemption (still sealed in its original package) I don't have anything, so this would provide very loopsided battles. ^^
Posted by Parcival at 09:47 No comments:

Email ThisBlogThis!Share to TwitterShare to FacebookShare to Pinterest
Labels: terrain 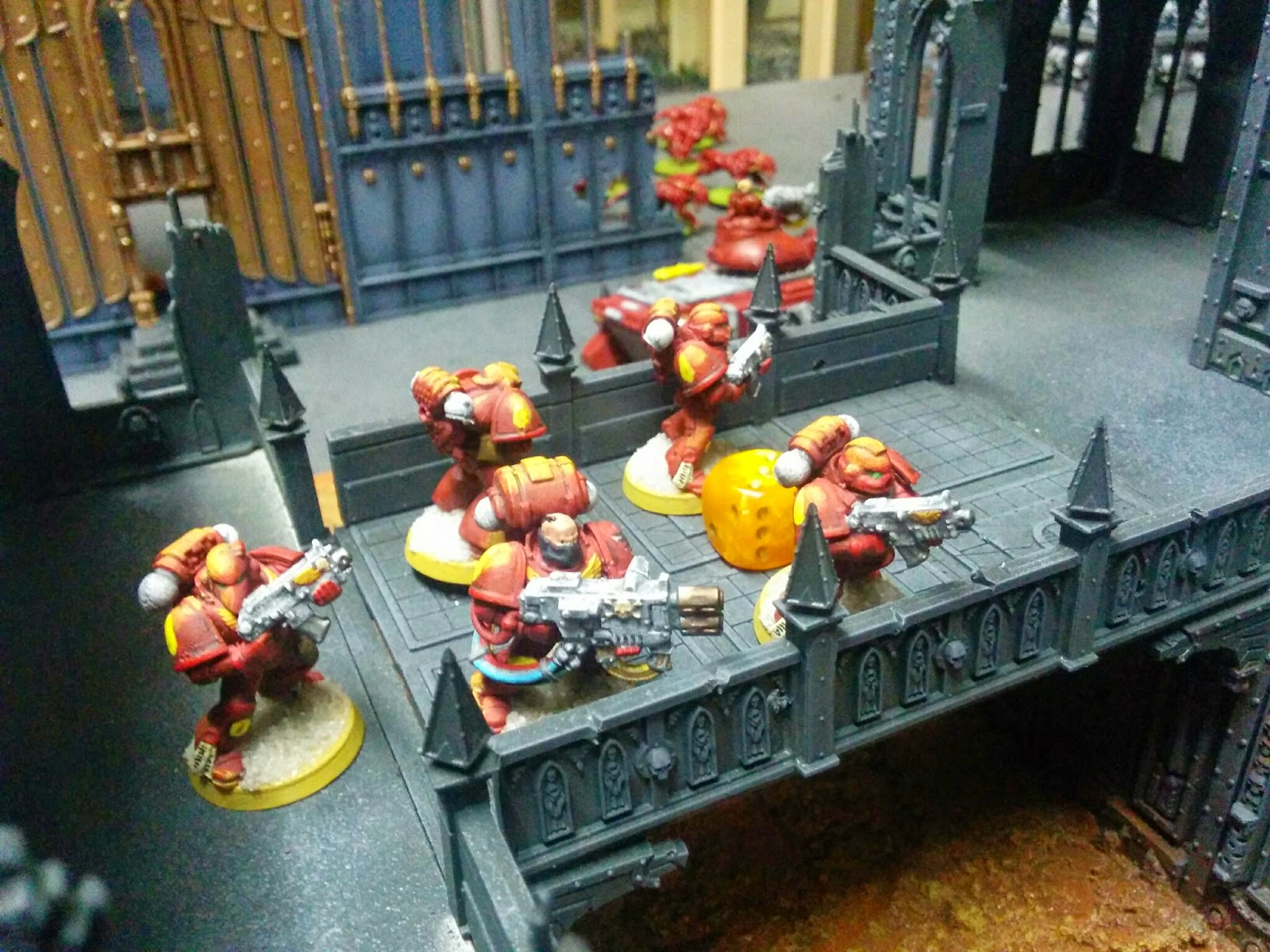 Belamor, Sanguinary Priest of the 2nd Blood Angels battle company, didn't believe his eyes as he watched Khorne Daemons charge the Tyranids with his very own men. After suffering heavy losses from the Daemons, Belamor regrouped his men, improvised a field hospital for the wounded, had the most urgent repairs done on the Baal Predators, and had hoped that all this will be good enough before reinforcements arrive. Just then his farthest outpost radioed in a sudden contact with Tyranids seemingly coming out of nowhere and as his tired men mounted their defensive fire, the Daemons were back all of a sudden as well. However, this time they slid past the Marines and directly charged the alien creatures. What in the Emperor's name was happening on Teritarius Secundus?


Welcome to my battle report where 745pts of Khorne Daemons and 751pts of Blood Angels fight it out with 1500pts of Tyranids. Come the Apocalypse!

This game was devastating for the Blood Angels/Khorne Daemons Allies as they had board control plus Tyranids running around with no synapse creatures, yet the Allies lost. Had this not be a friendly and casual game, the Allies should be totally ashamed of their performance. A key factor surely was the inefficient use of the Khorne Daemons; the Greater Daemon died too early and with him our only hope against the Tyranids' Monstrous Creatures. The Bloodletters proved to be extremely fragile against Overwatch fire, so they were sort of a disappointment, too.

Another interesting insight was to see how "Come the Apocalypse!" Allies perform on the field. The 12 inches of space required when setting up prior to the game makes it difficult to set up for a tactical advantage. Plus the Winds of the Warp didn't only work against the Tyranids, but also the Blood Angels - much hilarity ensued when Nurgle's Rot befell three Blood Angels units, but not Tyranids in one turn. In other words, it's easy to die from your own "allies".

PS: Sun Tsu added some corrections, please check the comments below. They are the result of me not knowing the Tyranids Codex well enough, not grasping every action during the game despite trying to pay attention, and writing the battle report several days after it has happened. 😄

Belamor and the 5th Tactical Squad watched in horror as both their battle brothers plus the Daemons dissolved in a sea of claws and bioacid. They fired their Bolters in support of their brothers in no avail. When the dust of battle had settled, the Tyranids were retreating as well - surely just to regroup and come back later leaving no hope for the remaining 5th Squad. However, there was one thing Belamor feared more than the return of the Tyranids: proving to an Inquisitor that he and his squad hadn't been touched by Chaos...


Lately I have been helping nu55kill, Team Captain of the Swiss 40K ETC Team, add greenery to his 40K ruins at our local game club, the League of Gentlemen (LoG). Years ago he started by gluing his 40K ruins to desert style base plates, but recently he got plastic plants for a mere couple Euros in Konstanz (Germany), so we've been busy adding that. The finished thing looks to me like ruins in a oasis and the thick greenery triggered the urge in me to start a Catachan army, but obviously Tallarn Desert Raiders would work as well. 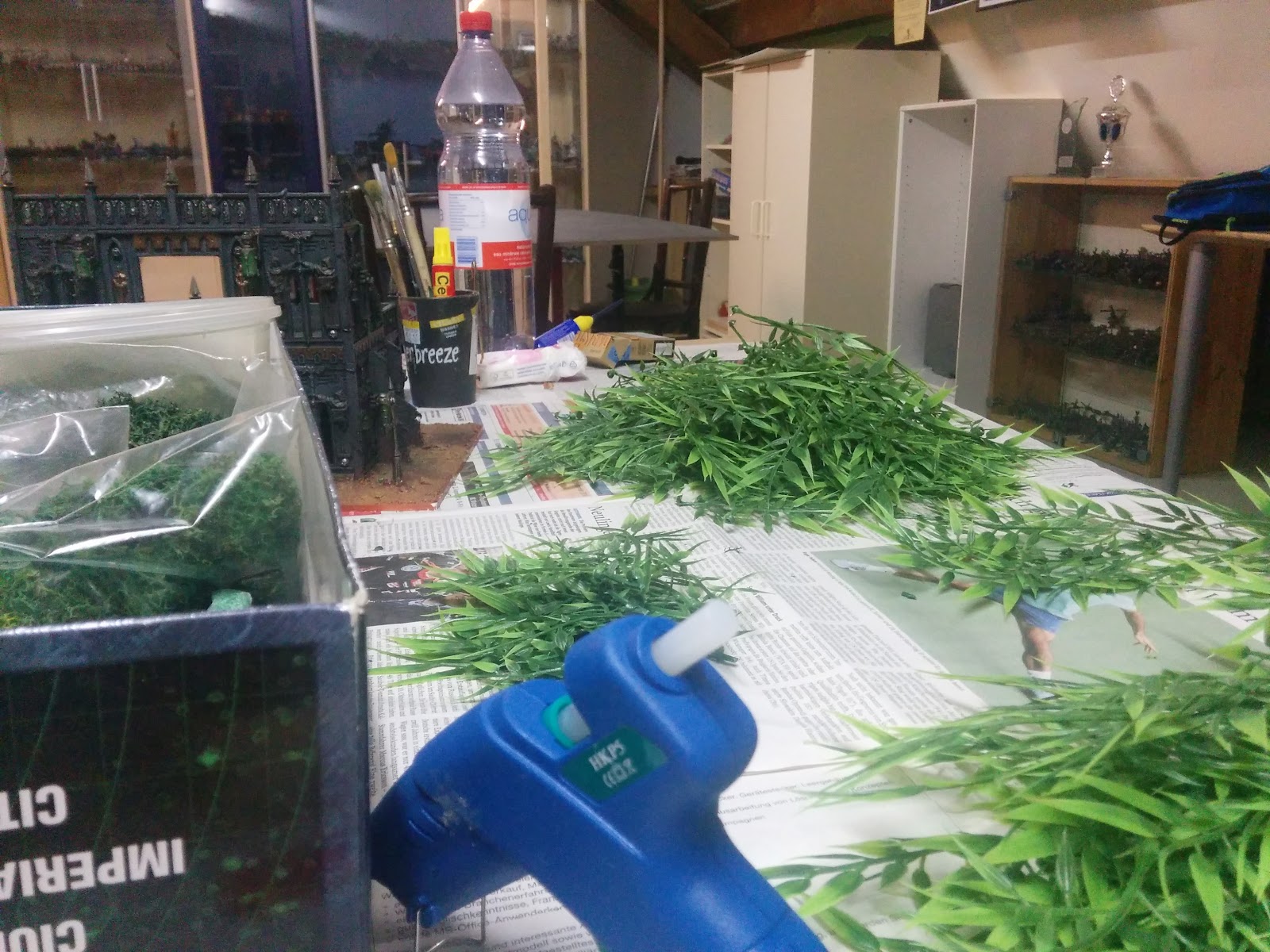 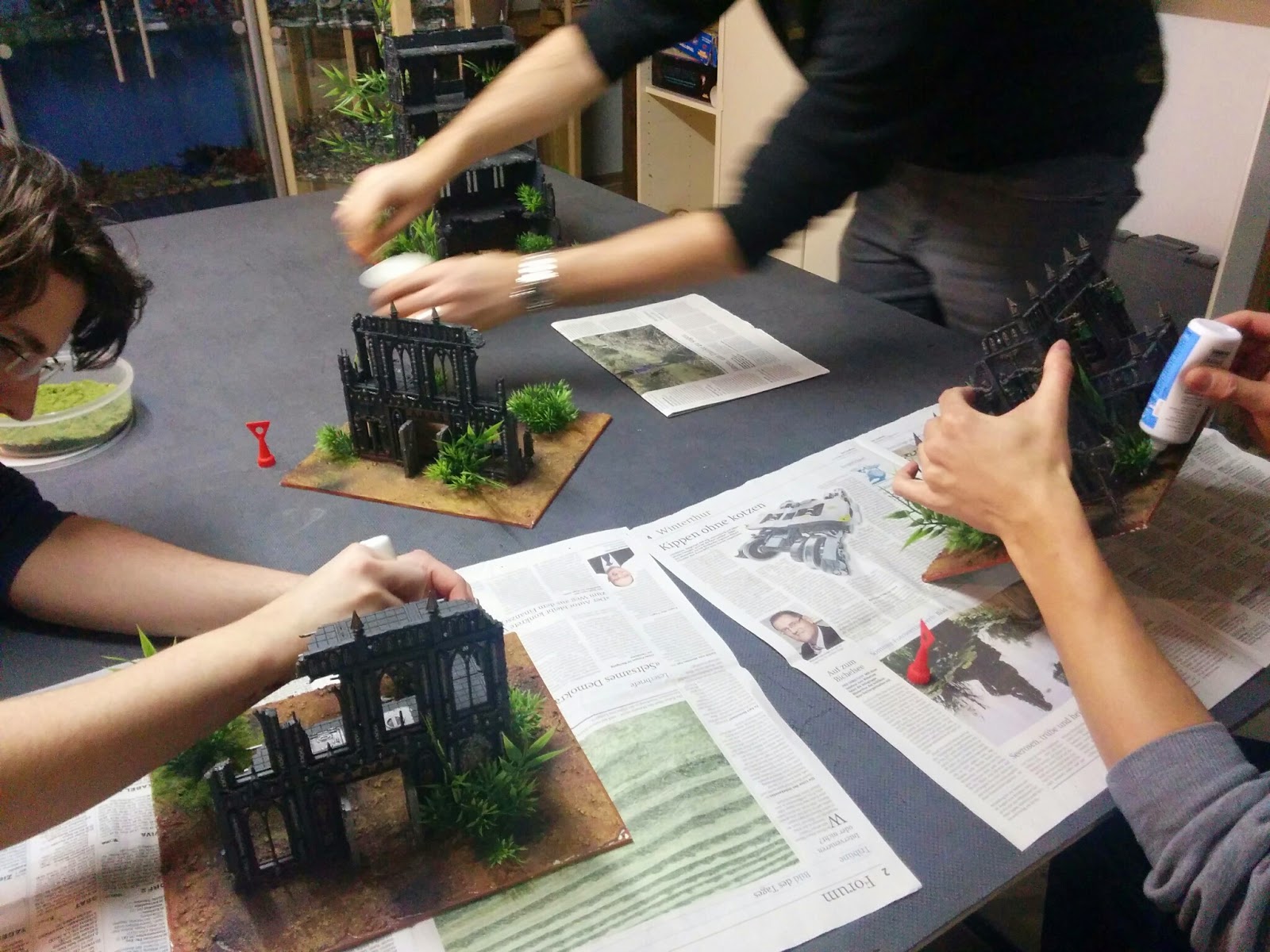 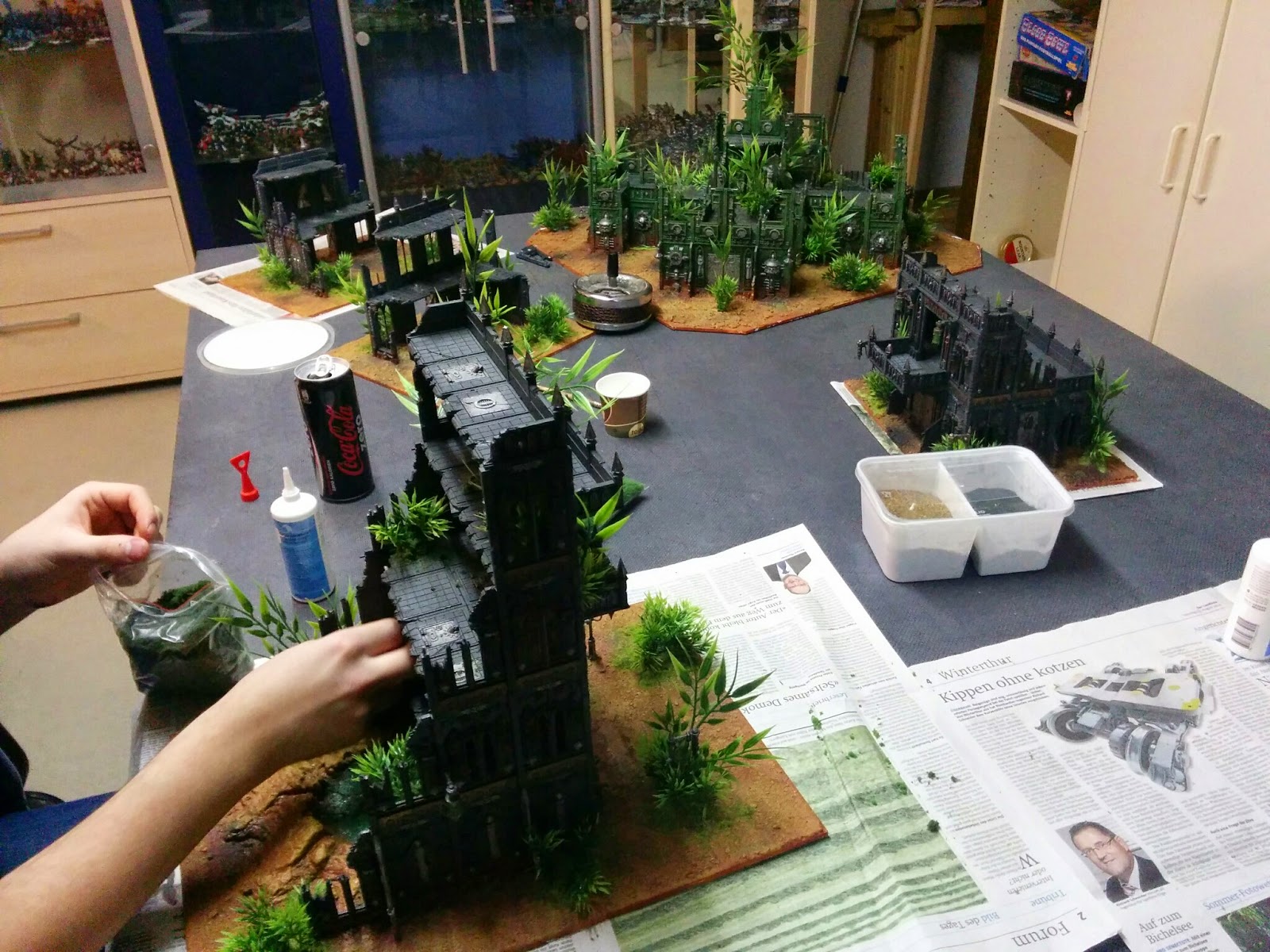 Once we were done gluing everything together, we took the opportunity to showcase a few minis in our new/improved terrain. 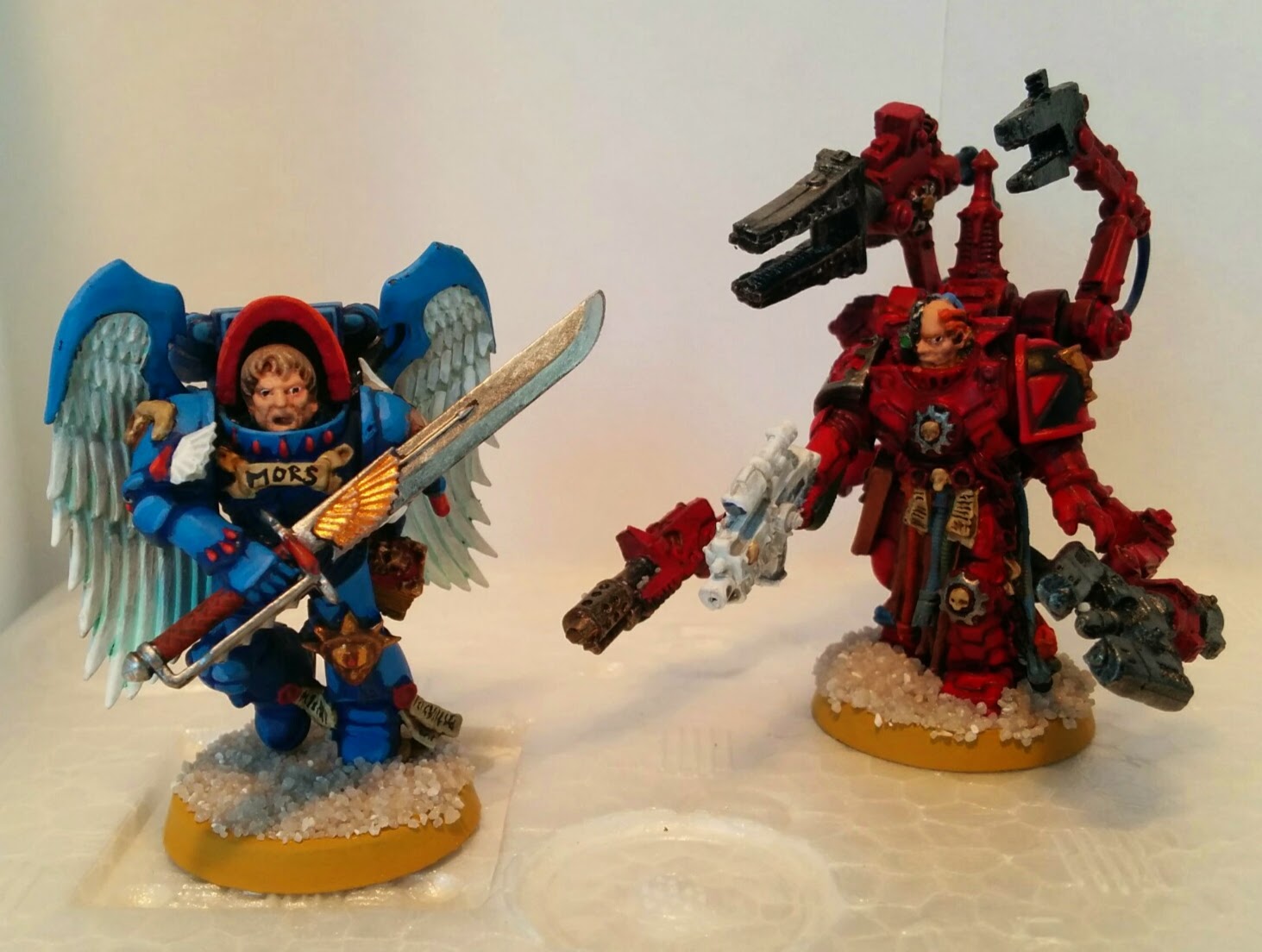 As discussed in my previous blog post, I am currently painting up additional pieces to my existing Blood Angels force to have something more suitable for 40K 7th Edition. For starters I painted my two new HQ models, the Librarian and the Techmarine. A Librarian with a Jump Pack simply is a must for any Blood Angels force and was hence long overdue; Techmarines are substantial for any chapter's success and get way too little play time from my point of view, so there I am trying to change that. 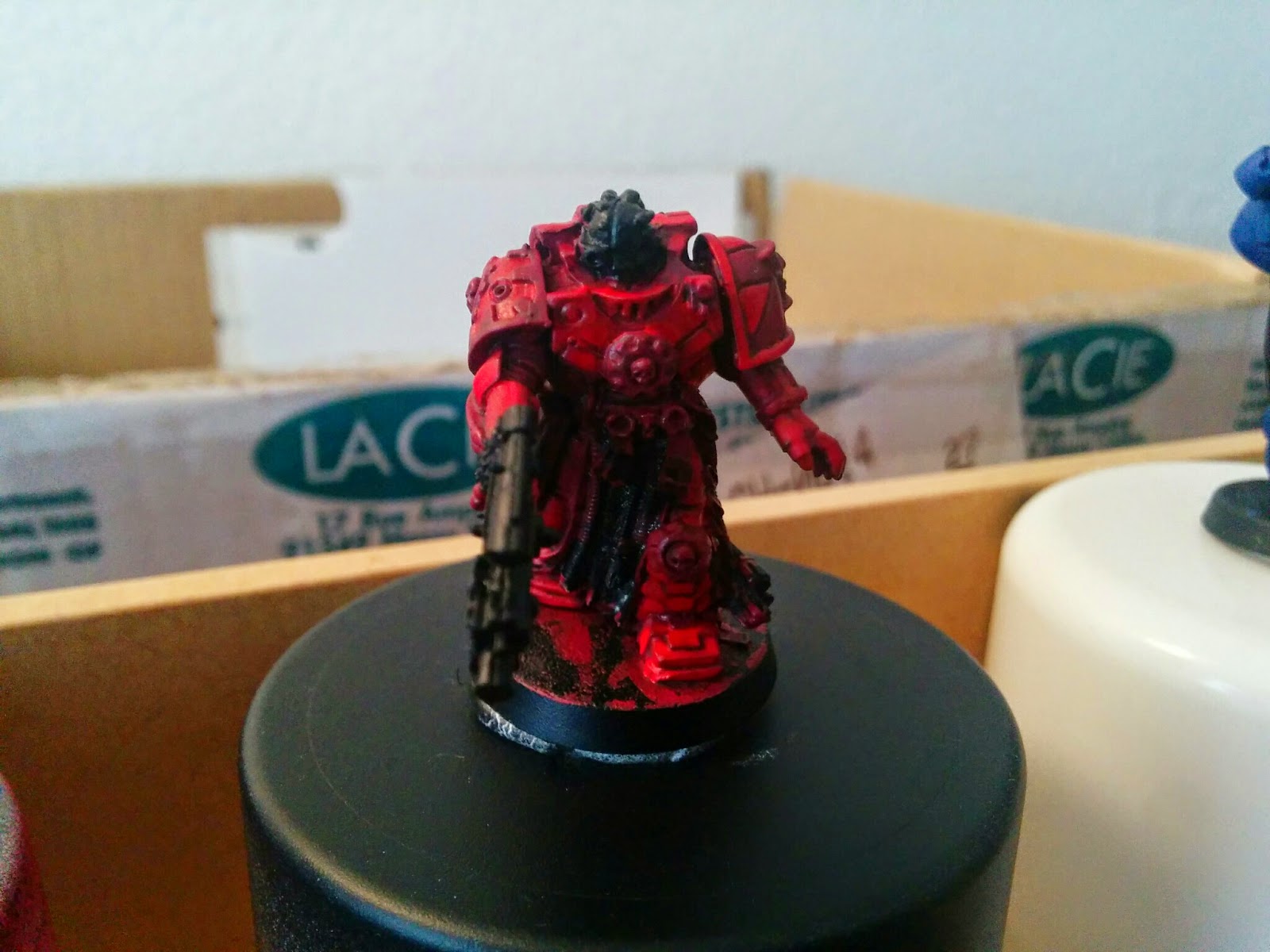 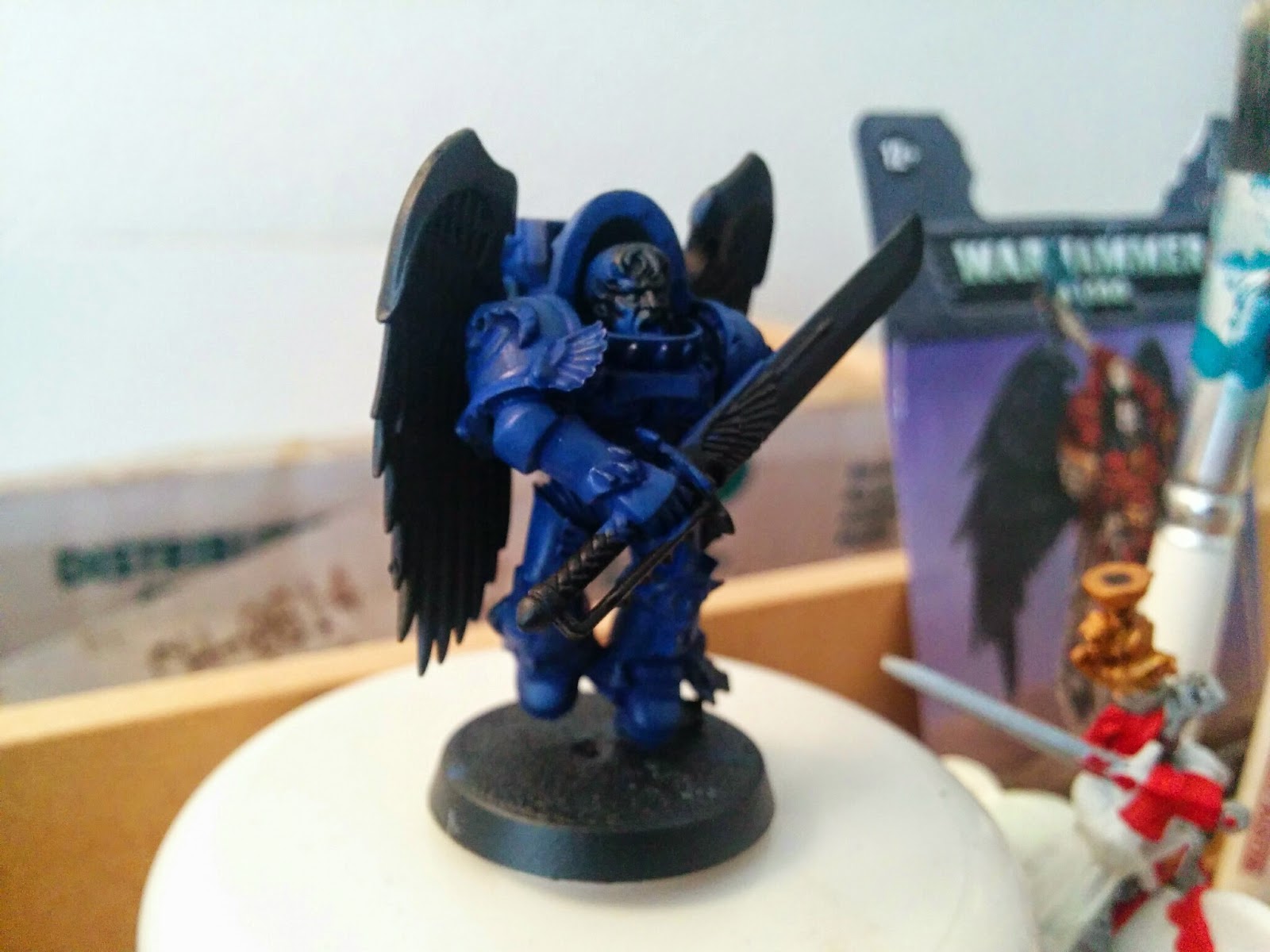 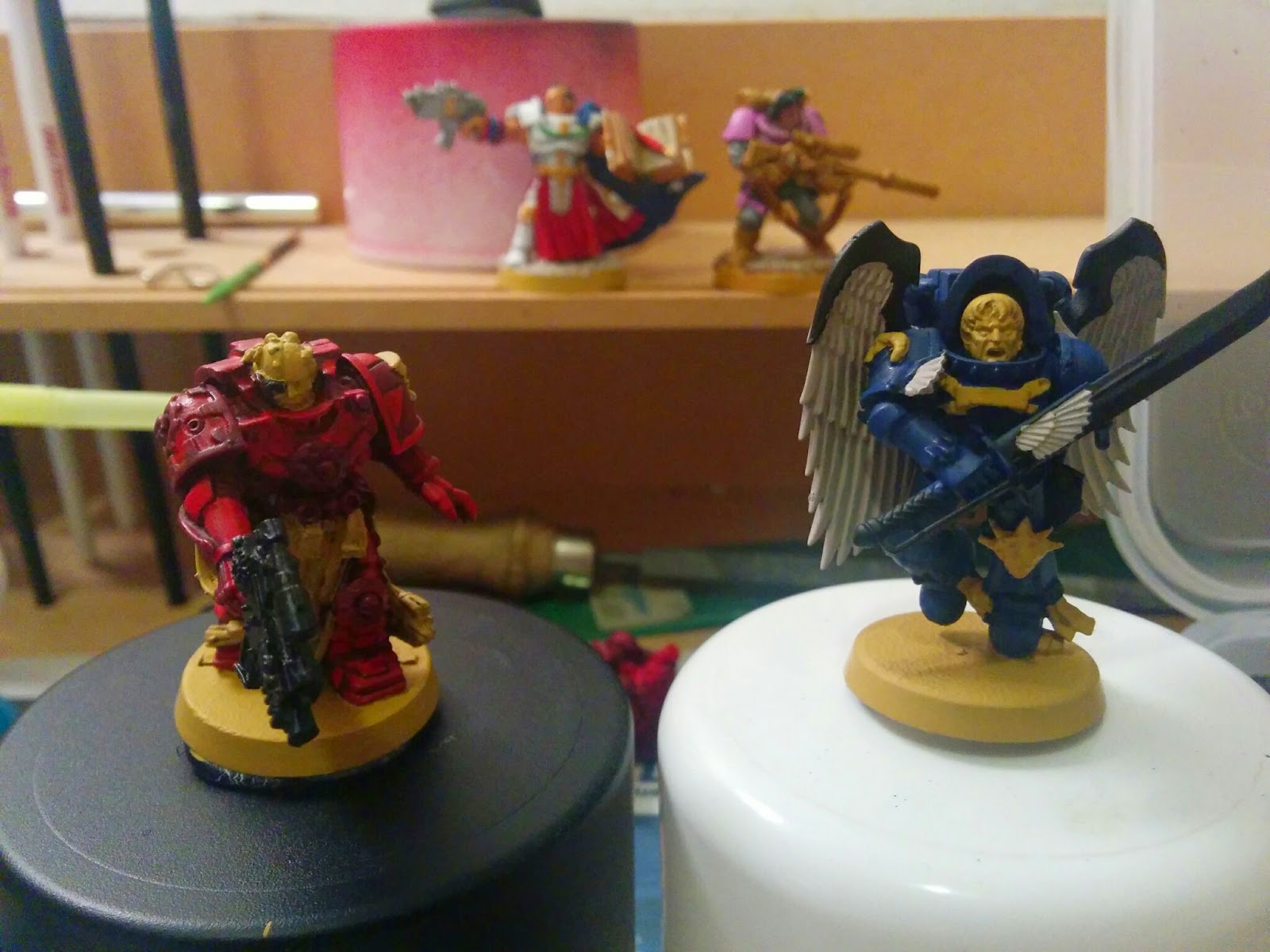 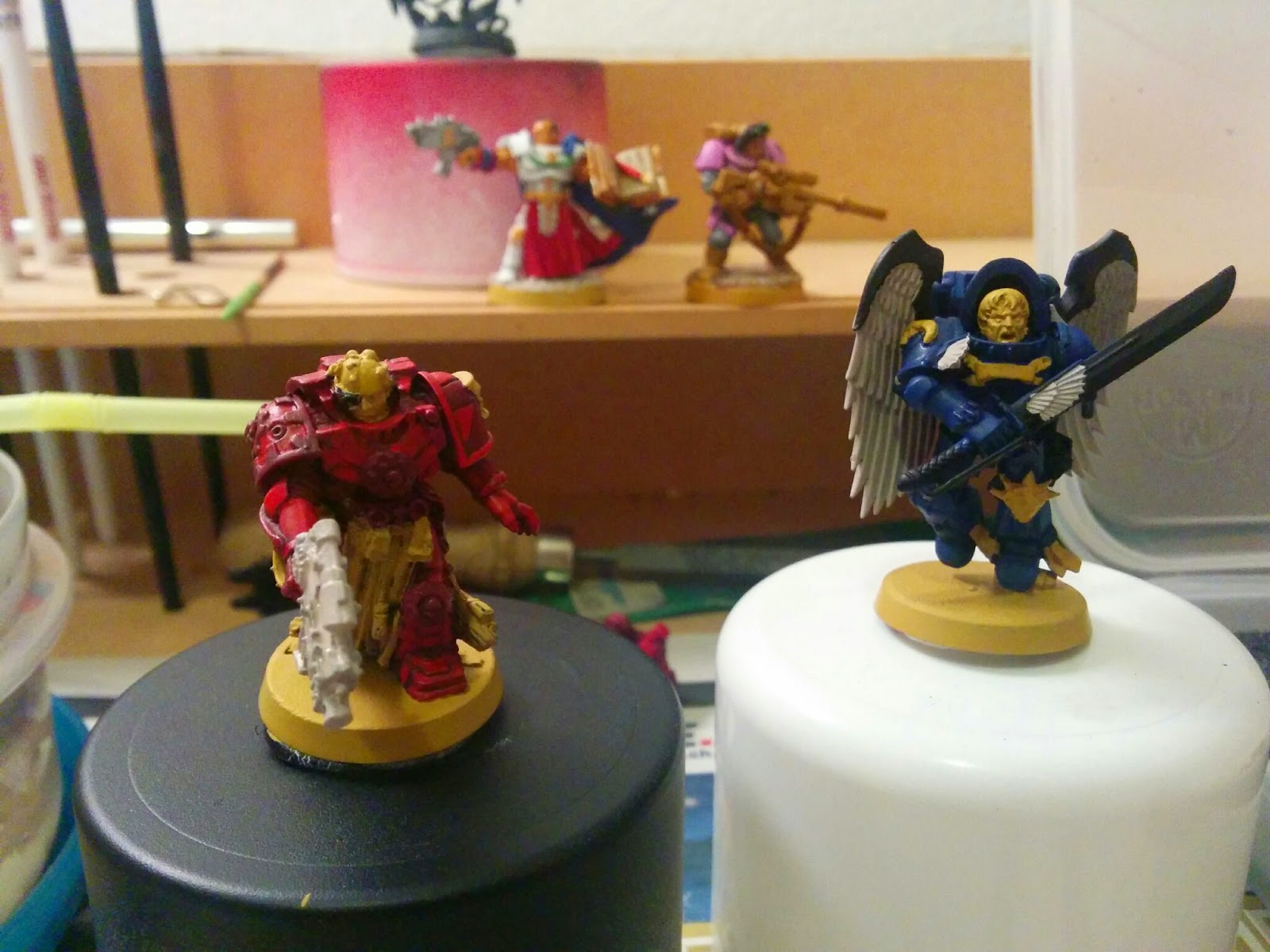 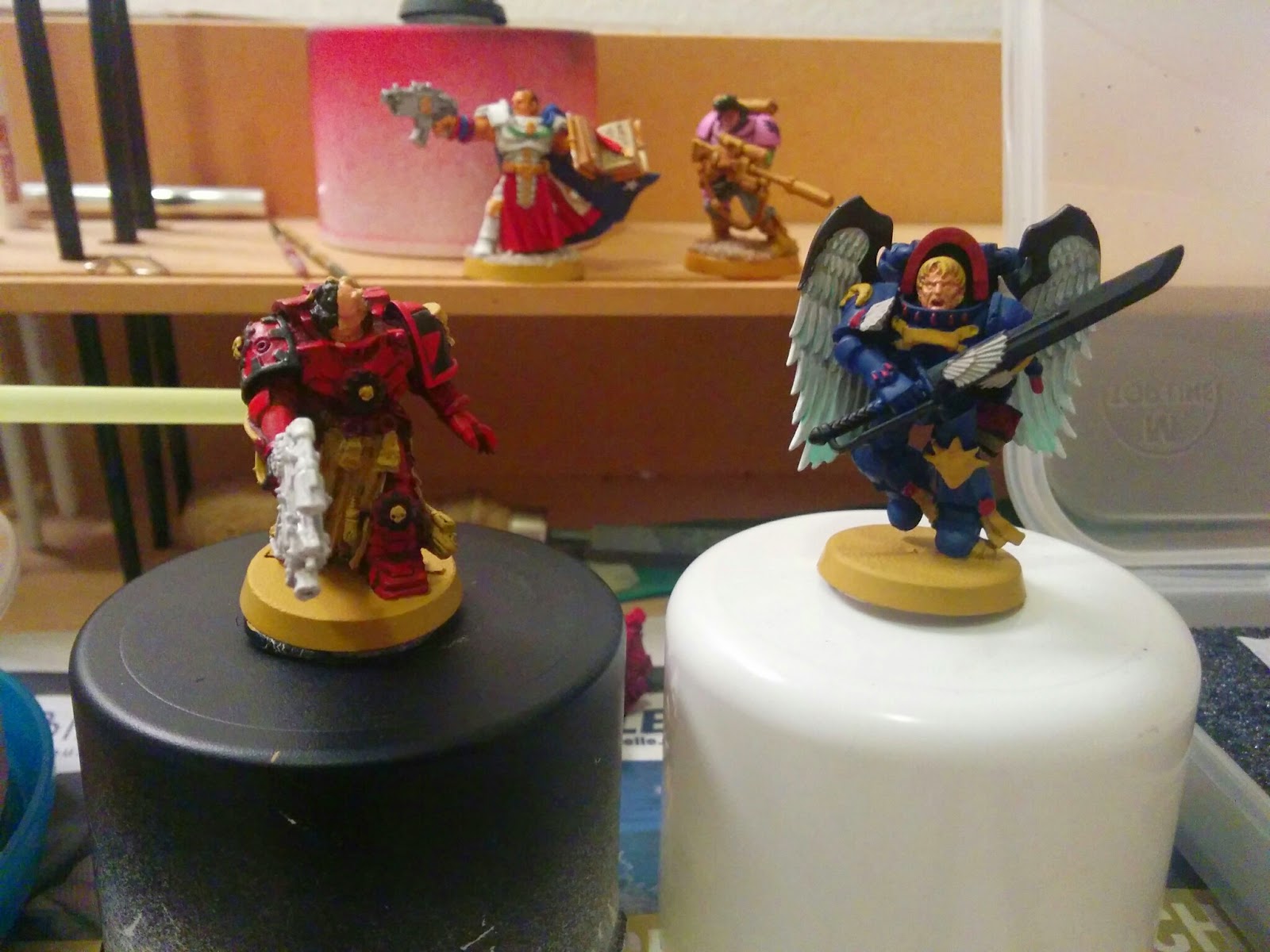 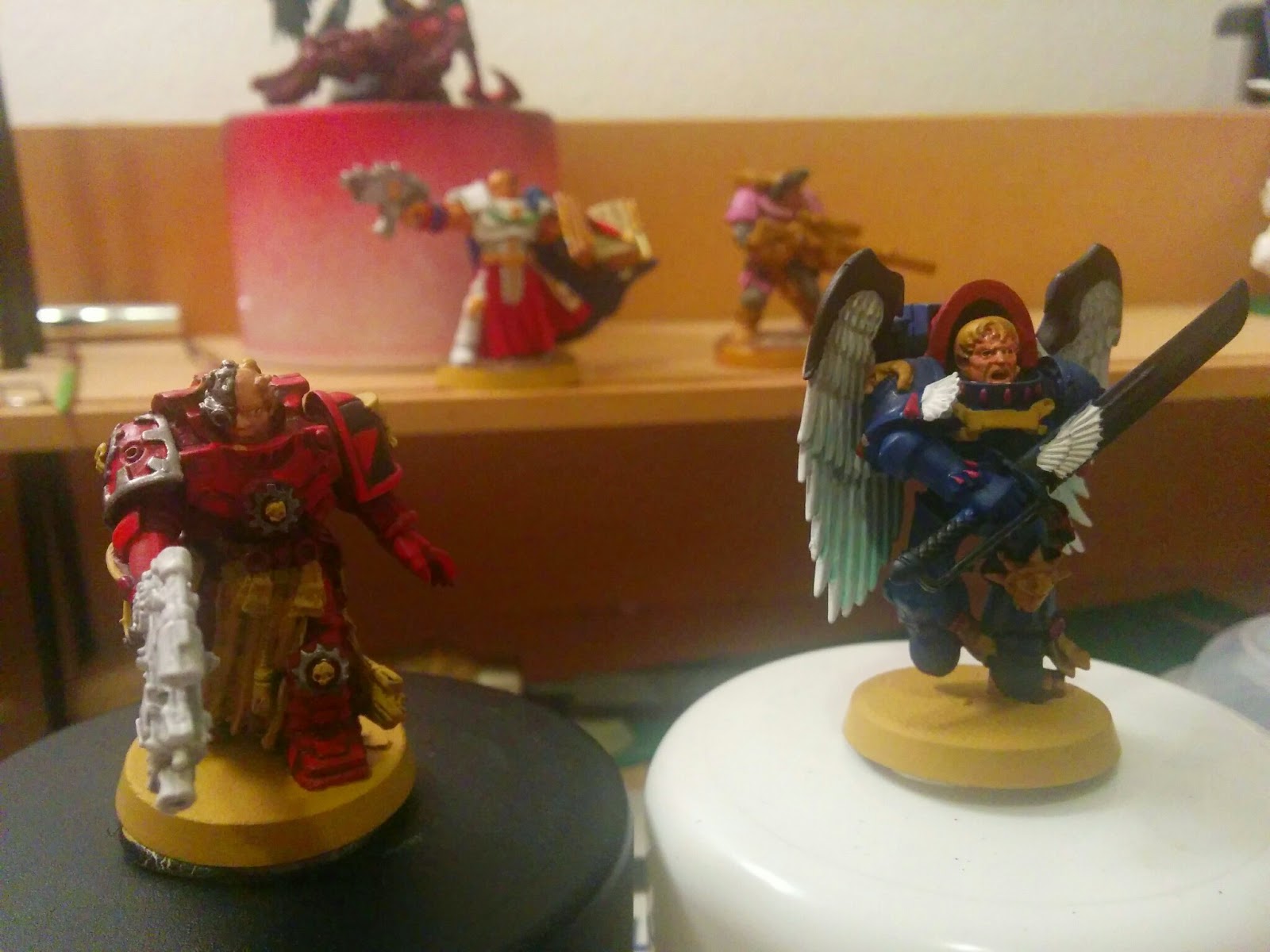 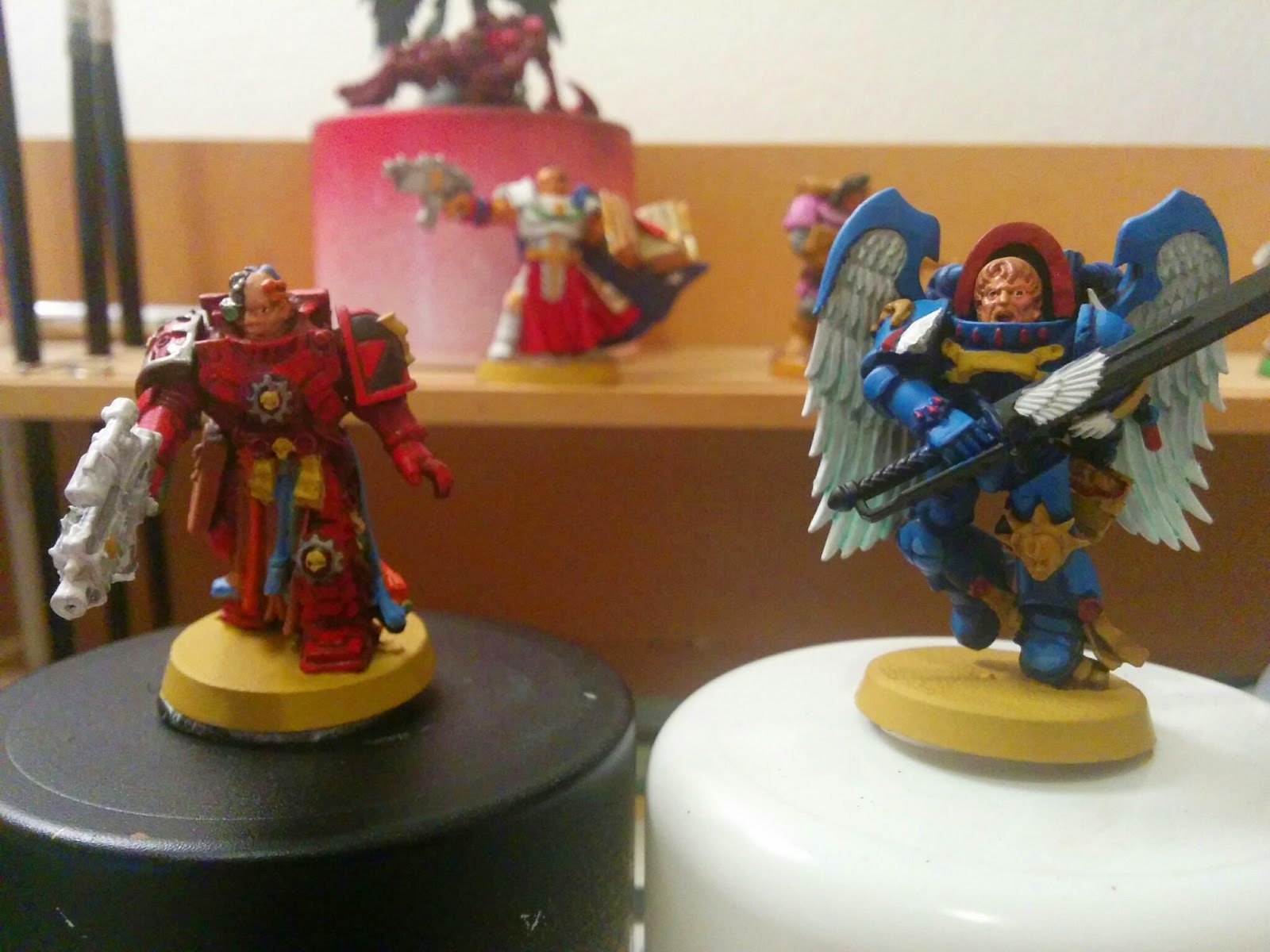 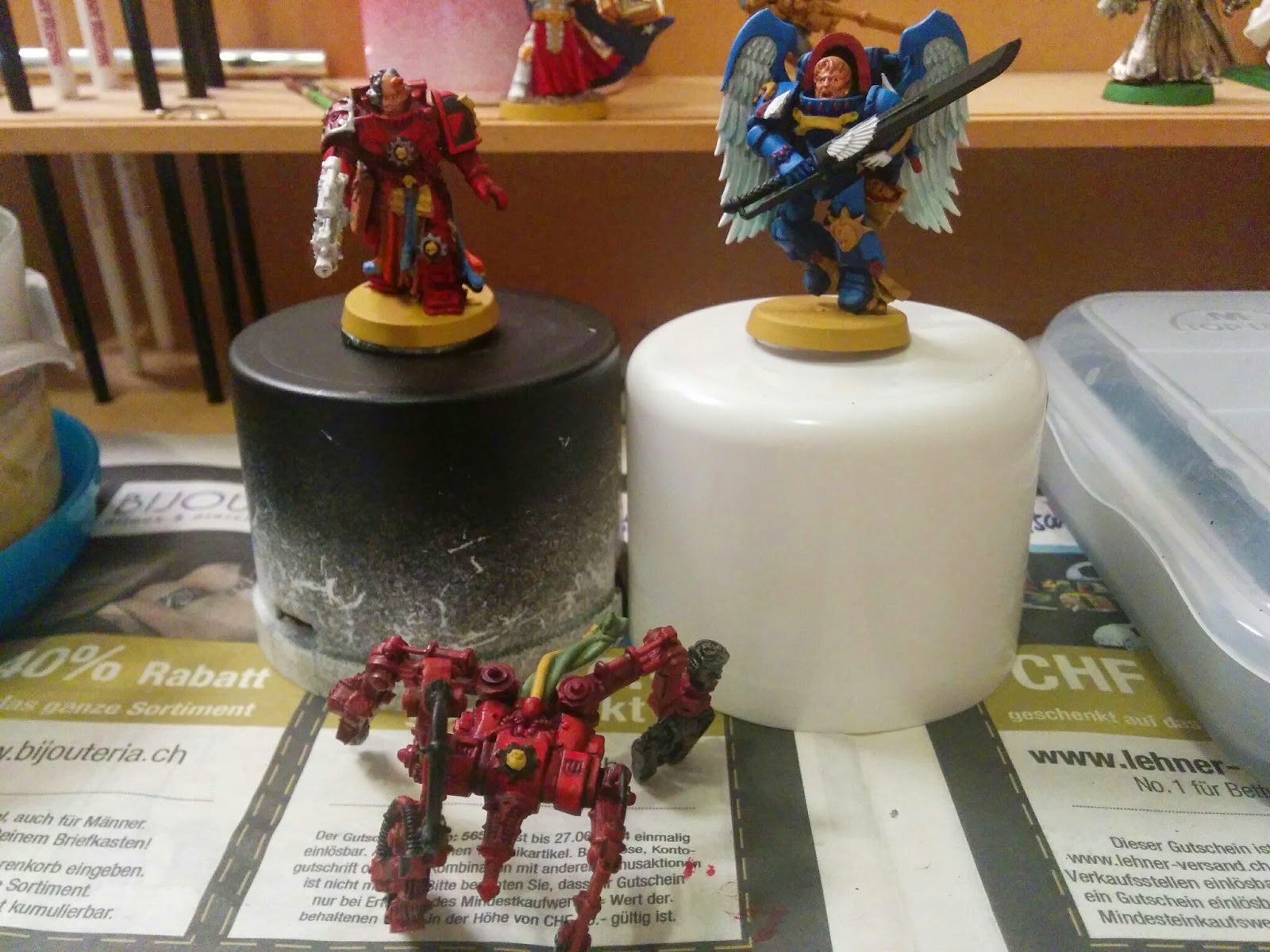 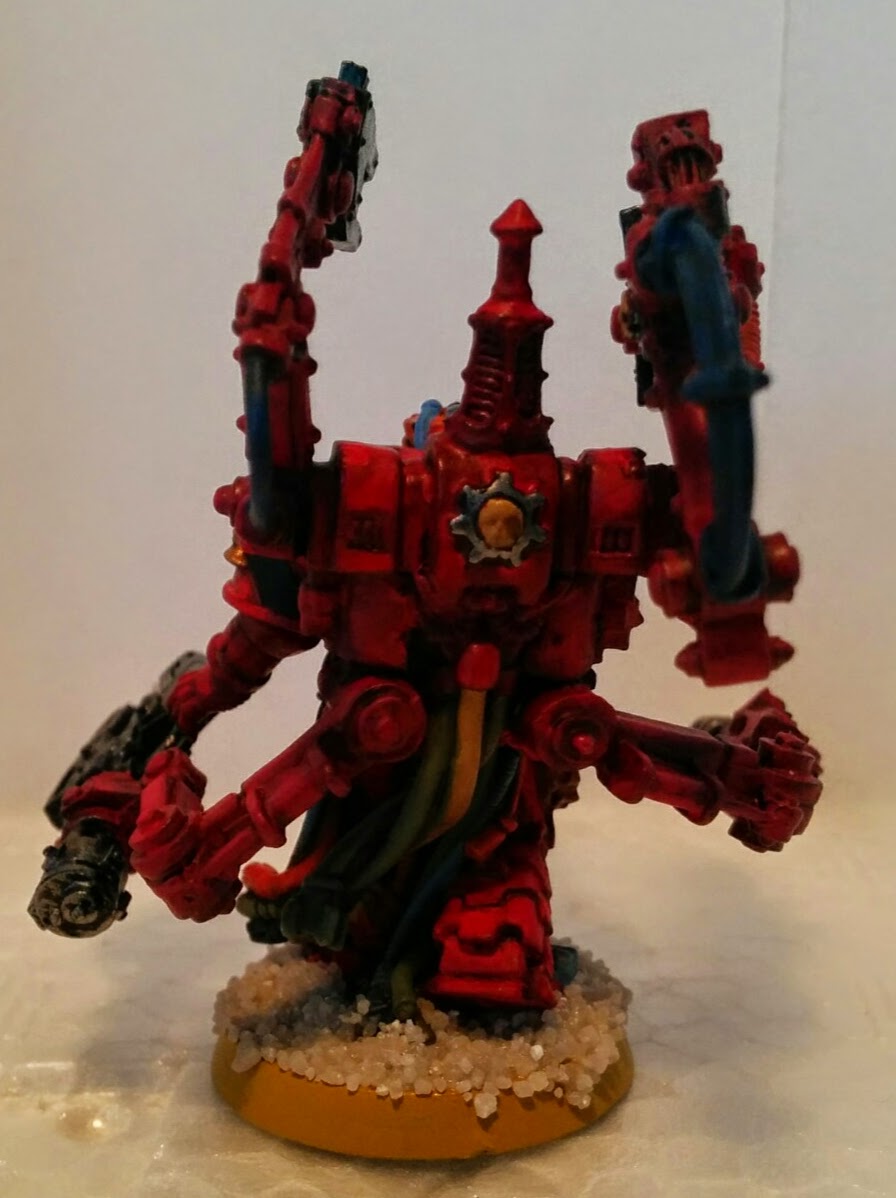 Posted by Parcival at 19:00 No comments: