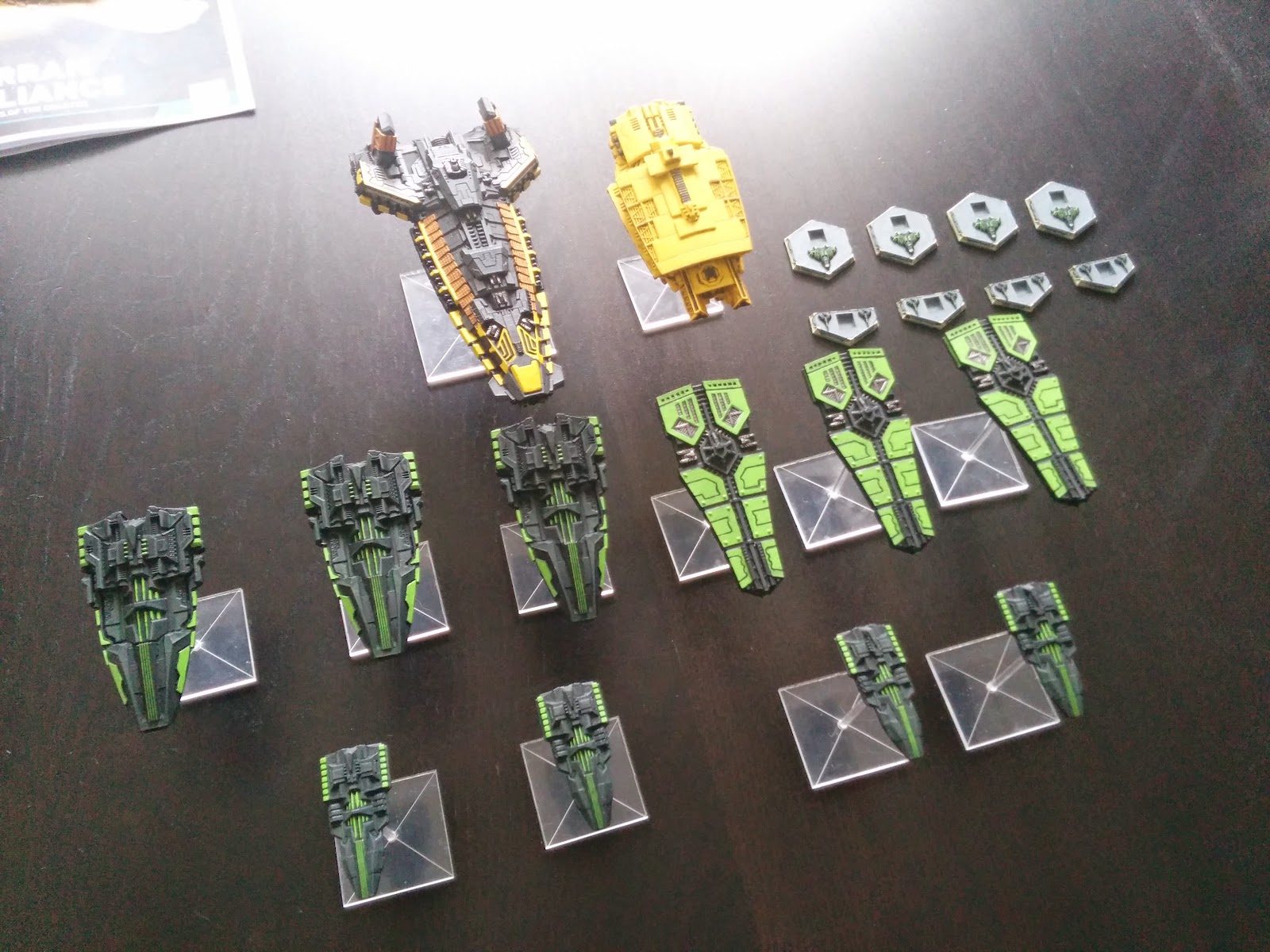 I added a few more models to my Terran Alliance fleet so now it is aroundish 800pts (Patrol Fleet) strong. :-) New in this picture in addition to the starterbox:

Here we have a close-up of the carrier and the three destroyers. 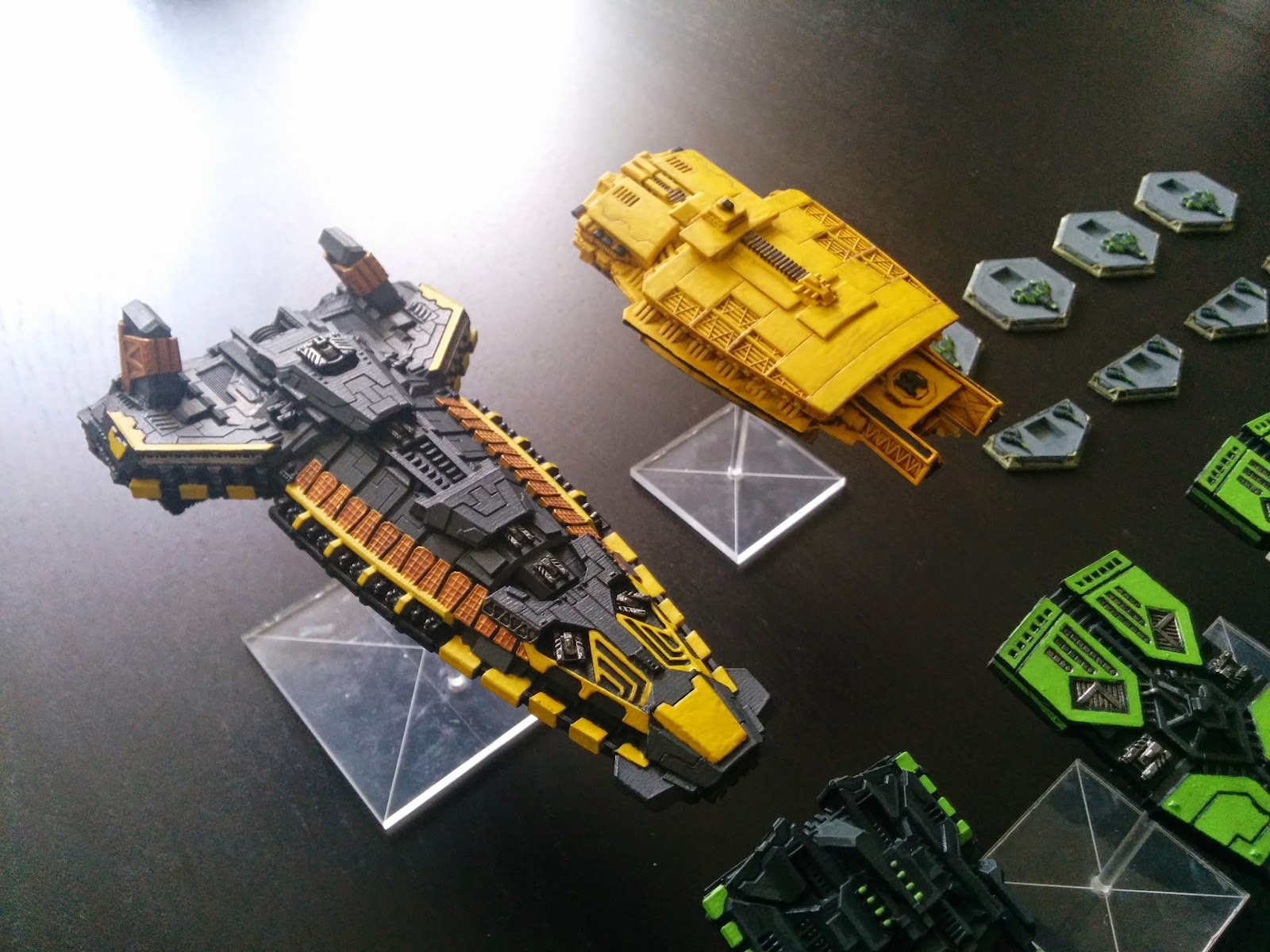 Since I am always looking for the right bag and foams for my armies, I also post here my bag's layout just in case it may help someone else with the same questions.

As I needed a larger bag for my DW fleet my Feldherr Mini Plus temporarily got empty and now stores my Terran Alliance fleet. I am continuing to be amazed how one can store an entire army in such a small bag - and this isn't just a starterbox getting boring after three games plus I still have plenty of room for further additions.
Posted by Parcival at 17:22 1 comment:

So tonight was the first night my Terran Alliance fleet saw some action versus +Francesco Tornimbeni's Hawker Industries. While Francesco was a perfect gentleman, his models also natural allies to mine as defined by the rules, so playing against him gave me also an impression of what amy be in for me in the future. :-)


When we finished setting up, Francesco moved his battleship from its original place on his left edge to the place where you can see it in the picture.
I felt pretty good about setting up and had the intention to cram everything between the asteroid field in the center and the planets on my right, effectively playing a refused flank. Using the grey planet's gravitation field I also expected to speed up my yellow battleship quite a bit.


Well, everything happened differently than planned. At the end of turn 1, three of my four frigates were already blasted into oblivion as I moved them last. Prior to them the cruisers and the battleship fired through the asteroid field, but at half dice with little to no effect.


In the second turn I committed my battleship to swing left and and block Francesco's battleship which was still approaching at enormous speed. In the meantime, his remaining fleet started grinding its way through my remaining frigate and the cruisers which were at this point heavily damaged or gone already.


Turn 3 saw the death of my remaining frigate and the two remaining cruisers. Our battleships passed and threw everything their broadsides had to offer at each other.

Turn 4 was again about the two battleships firing at each other while Francesco's remaining fleet moved in for the kill. Because of the damage on my battleship it became increasingly impossible to do any damage at all, so basically we could have called it a game here because it was evident I am going to lose it.

In turn 6 my battleship was finally shot into pieces. The game ended with 18 victory points for Francesco whereas I had -8 victory points. (which I feel is kinda silly for a wargame to have negative victory points, but I guess in the end it's just a matter of scale and taste) In other words, he won with a difference of 26 victory points. He lost one frigate while I lost my entire fleet. :-/

So what were my major mistakes to learn from in the future?

So all in all it was a very unpleasant yet instructive experience which I still hope not to repeat in the future too many times. At this point, Dystopian Wars feels easier for me because in that game I usually envision a general strategy for a game which always works more or less as I put it into action. In Firestorm Armada, however, it feels to me as if I run into tons of obstacles before I can even put my strategy in place. Now I don't know why that would be, be it the character of Terran Alliance fleet, the different players than those I play DW with,or the different rule set. Oh well, we'll see better after a couple more games. :-)
Posted by Parcival at 00:46 2 comments:

FSA: Terran Alliance up and ready 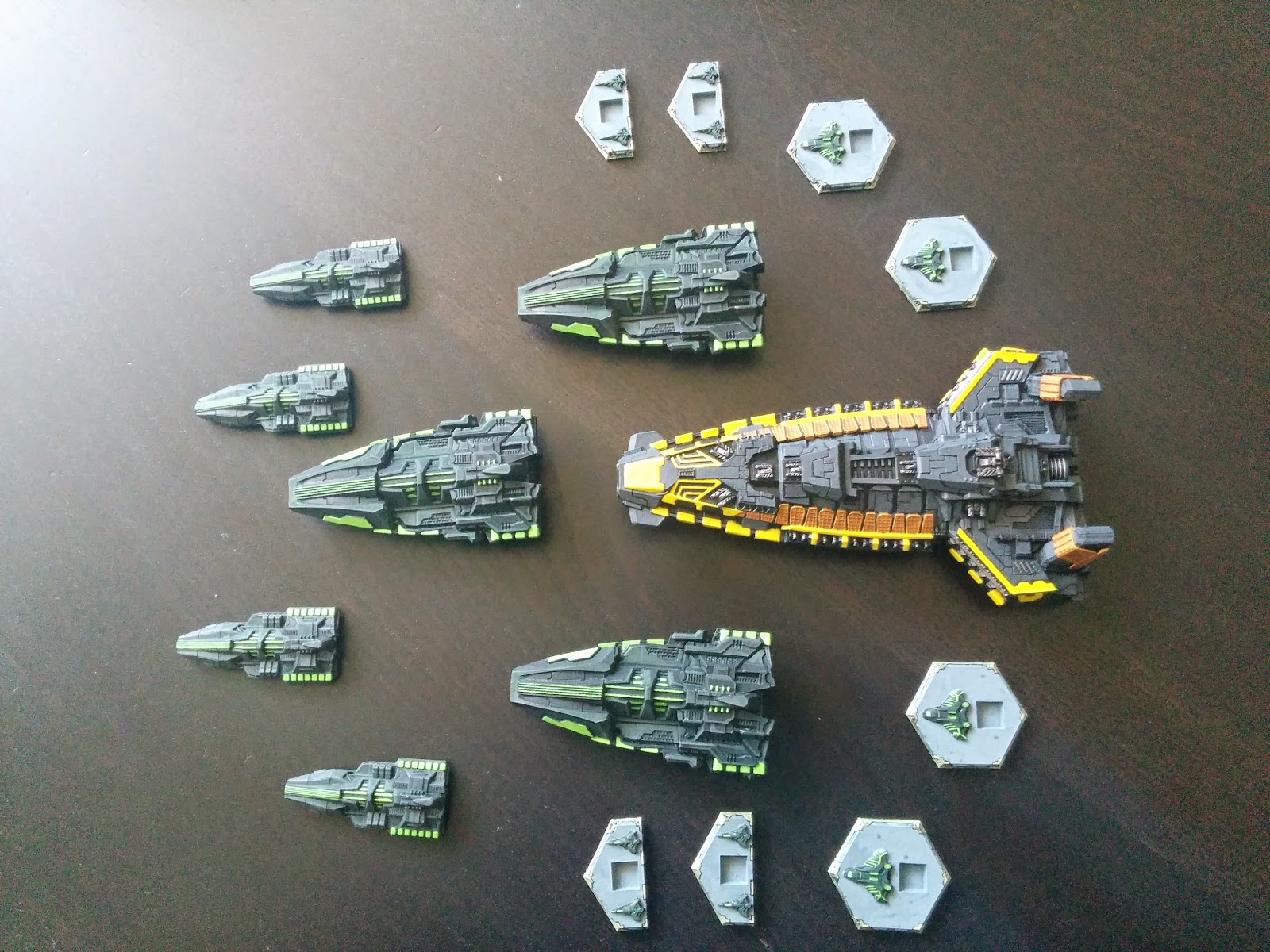 Well, I am done painting my Terran Alliance starterbox for Firestorm Armada. :-) It was a blast to paint these models and big thanks to +Tudor Stanescu for letting me have them and encouraging me to go on when I was thinking about the color scheme. :-) 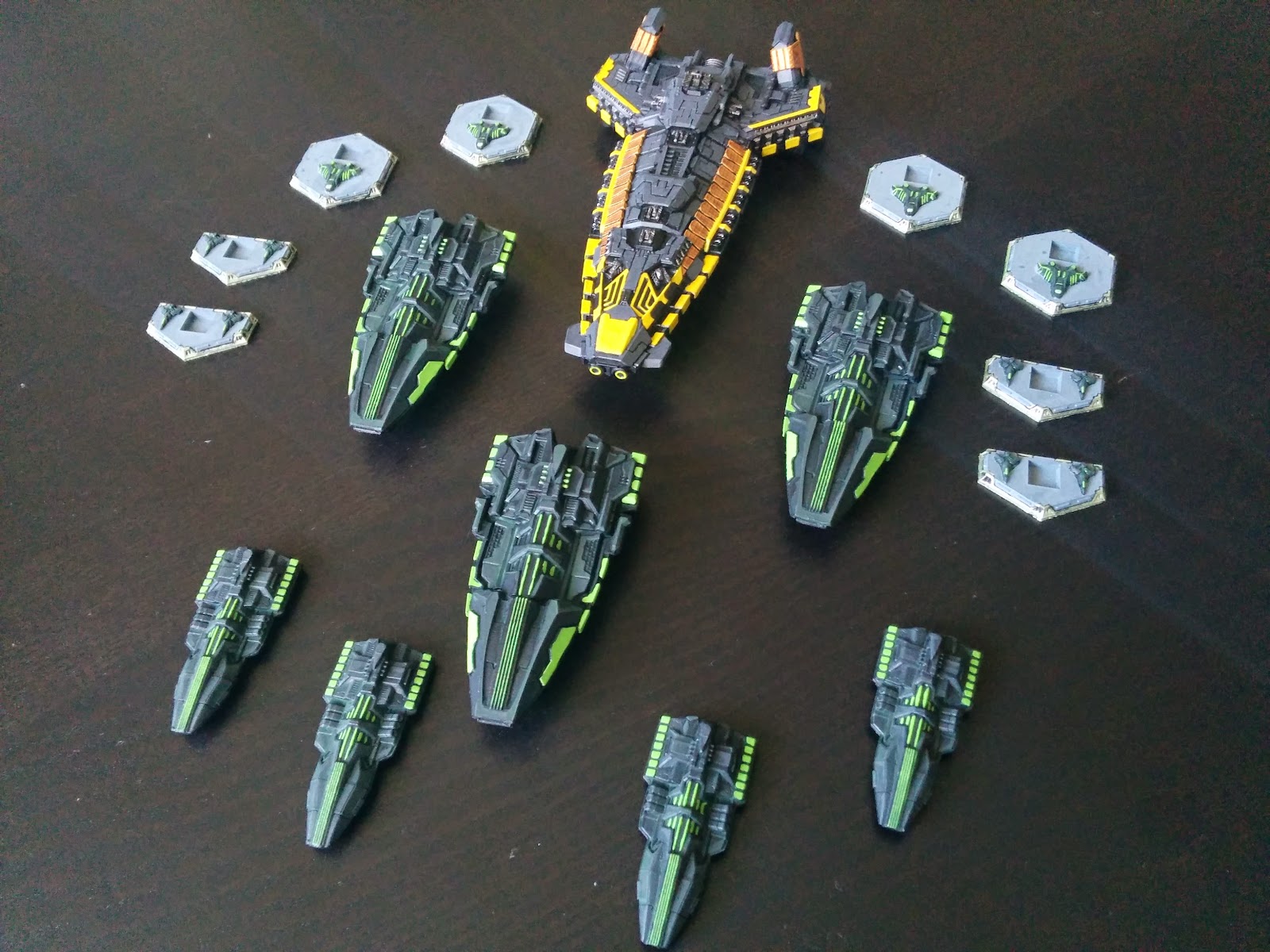 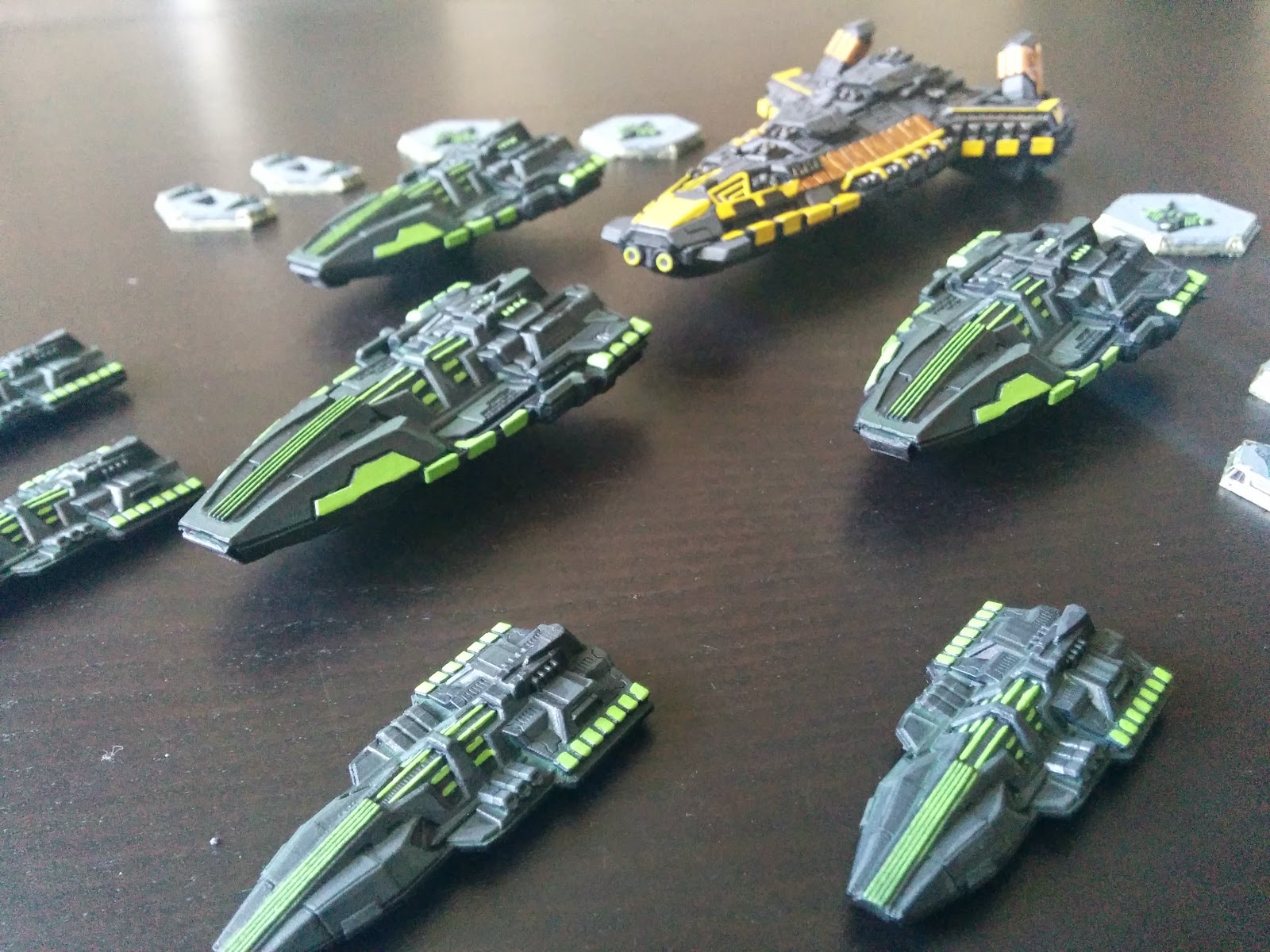 Here some WIP shots for those who may care. :-)

Posted by Parcival at 16:44 No comments: