I got myself some shelf space

I finally got some shelf space in our local gaming club and took the opportunity to take a picture of all my painted models. I painted them between Summer 2008 and Fall 2009 when our daughter was born. Now I paint at a slower pace and I still have at least as many Blood Angels still to paint, but I am already very satisfied of what I managed to paint so far – they are about 6’800 points worth of models. 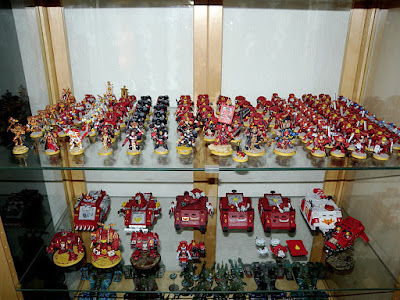 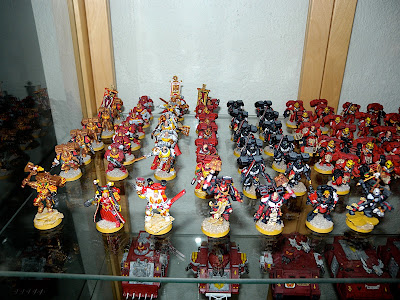 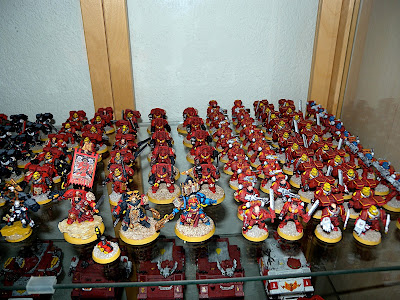 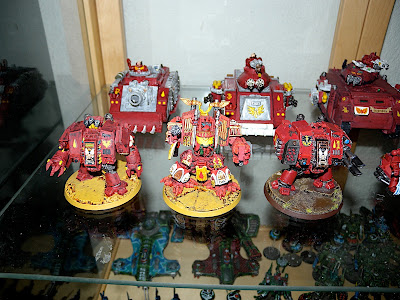 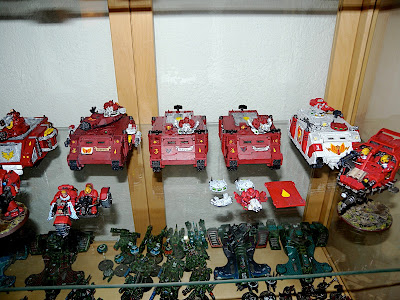 (Below my Blood Angels you can spot nu55kill’s magnificent Tau)
Posted by Parcival at 11:52 No comments:

So, after thinking through the new Blood Angels Codex over and over I have finally come up with a new competitive army list that I want to work on in my painting queue. The list is based on two paradigms by Jwolf on BoLS:
Furthermore, I want this to be an allround list that can handle virtually every opponent. Lists with über-units may get your opponent desperate on day one, but once the community has found out how to beat it, there goes your strongest ace and with it the entire list. Therefore, the focus of the following list is heavily on basic units that may not have as much punch, but a high and constant reliability over time.
***HQ***
1 Epistolary
1 Honor Guard (Sanguinary Novitiate, Blood Champion, Meltagun, Razorback, twl Las Canons)
***TROOPS***
2 Assault Squads (10 Marines, Powerfist, 2 Meltaguns, Rhino)
2 Tactical Squads (10 Marines, Powerfist, Meltagun, Missile Launcher, Rhino)
***FAST ATTACK***
2 Baal Predators (twl Assault Canons, Heavy Bolters, Dozer Blade)
***HEAVY SUPPORT***
2 Vindicators (Siege Shield)
TOTAL COST: 1745 POINTS
The tactics behind this list are very simple: use the Assault Squads, the Razorback, and the Vindicators to attack the opponent in his deployment zone. Flank in with the Baal Predators to close the trap. Use the Tactical Squads to capture mission objectives and provide supporting fire. Use the HQ to provide supporting fire as well, boost the Assault Squads, cast and protect yourself from psy powers, and deliver that instant kill if needed.
Goatboy was so nice to give me comments on an earlier draft of this list. The most important point he made that he finds the extra weapons on tanks useless as they will most of the time drive their 12″ per turn and fire their main weapon only. I sort of disagree with that since Blood Angels players know fairly well what the amount of devastating shooting a Baal Predator can lay on the table when it fires all its weapons – and at 24″ there are only few opponents that are going to charge you in the next turn.
Either way, I am on my way to building this army now. Once it’s done I’ll let you know how it’s doing in battle.

Posted by Parcival at 11:54 No comments: 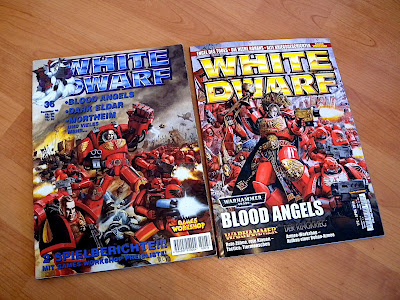 So, the waiting has finally and end and we can look at printed beautiful Blood Angels pictures in the current White Dwarf.  However, throughout these years I kept an old copy from December 1998 as the Blood Angels were my dearest 40K army already back then.
White Dwarf 36 (the German version uses a different numbering system) featured an introduction to Angels of Death by Gav Thorpe, had the rules for the new Baal Predator model (the one with what is considered now the old Rhino chassis  ), a painting section (including banners), an extra special mission for Blood Angels, and a battle report between 2964 points of Eldar versus 2999 points of Blood Angels. Last but not least, the Codex clocked in at 15 Deutsche Mark.
Posted by Parcival at 11:55 No comments:

Mission was capture & control with a dawn of war setup; the game ended in a draw.

Captain Parcival checked his Tac Com and knew things didn’t look good. The 2nd Company formed a first line of defense in the outskirts of Plethora Hive, the last position the Blood Angels still held on Tenebra IX. The incoming data showed that Class C organisms were moving three klicks NW inbound. Soon there were going to be Tyranids everywhere.
Parcival went through his geotactical situation. In his immediate area of control there was a Dortis Sugar refinery and his own locator beacon. The Tyranids were surely going to feast on the sugar, but if they had a chance to destroy his locator beacon and cut him off from supplies, they wouldn’t let it slip either. Parcival told his troops to hide among the buildings so that the Tyranids would run into a seemingly empty area. He figured they only had a chance if they attacked by surprise and did a mechanized countercharge into the back of the Tyranid wave.
All of a sudden, there they were. A Hive Tyrant was directly charging with Termagants towards the locator beacon. Parcival ordered his very own Razorback and the Rhino of Squad Calrissian to move against these incoming creatures.
On the right flank, the Rhino of Squad Derian and the two Baal Predators rolled onto the scene and went straight for the sugar refinery where Hormagants and a Carnifex were trying to dig themselves in. However, just when the Rhino reached the refinery, the Carnifex charged the vehicle and tore it apart killing the entire squad with the exception of Sergeant Derian himself. Derian ran into the refinery and up the stairs onto its roof so he could take shots at the lingering Tyrandis outside. The Carnifex followed him into the refinery, however, and Derian could hear the brutal noises as this creature was smashing its way through the machines. Derian just hoped that the creature was too heavy to make it to the upper floors.
In the meantime, the two Baal Predators were busy killing Zoantrophes which they successfully did as they were still fully operational. However, mopping up the Zoes took away precious time when the Blood Angels’ infantry was in bitter need for their support.
On the left flank, Parcival and his Honor Guard exited the Razorback and took shots at the Hive Tyrant. The creature produced infernal screams as it felt the cleansing fire of the Emperor, but stayed focused and destroyed the Rhino of Squad Calrissian first. The Termagants quickly fell over the proud Warriors and the Hive Tyrant started to collect a heavy blood toll, too. However, Parcival stood firm in his decision not to yield a single meter to these creatures and let his Powerfist hammer onto the Hive Tyrant until the creature was no more. Parcival felt the stinking scent of the alien when he gasped for a breath of fresh air and tried to refocus, but in this moment a couple Venators came in and a Trygon dug out of the earth. Parcival played his last ace and called in Assault Squad Vincenzo who shocked down on the surprised Tyranids. Parcival’s and Sergeant Vincenzo’s Powerfists continued to do their ugly work, but a huge blow by the Trygon’s tail finally knocked Parcival off his feet and left him with an intense pain in his chest. He felt the warm comfort of Sanguinius wing’s folding around him and in the corner of his eyes he saw how Vincenzo delivered a last and final blow to the Trygon. And as Parcival’s memory was about to fade away, he heard the familiar beeping sounds of a locator beacon delivering its coordinates to some battleship in orbit…

Posted by Parcival at 11:56 No comments:

Why Blood Angels have 4+ INV Stormshields

Today’s merry topic is why Blood Angels have worse Stormshields than any loyal Space Marine Chapter of the Second Founding. Nobody knows quite the reasons, but rumors indicate that the Blood Angels actually order their Stormshields from Grotz in the Terto sector. 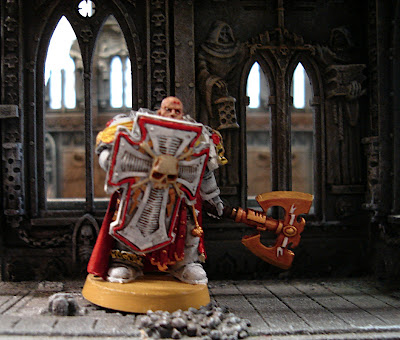 In other words, since the advent of the latest Codex: Space Marines it is especially evident that the Codex: Blood Angels is outdated. Common sense tells you that it is just natural to use some of the rules for the Vanilla Marine for the Blood Angels as well. Over at Bolter & Chainsword one can even download a nice homebrew “Codex: Blood Angels – Revived” that allows you to adapt the Blood Angels rules in a three tiers system depending on how close you wanna stick to the original. With this document, you can iron out all errors in the current Codex: Blood Angels and everybody could be happy – if it weren’t for reasons of jealousy.
You see, with the Codex: Space Marines, all those Vanilla players felt treated well again. Suddenly they had cheaper troops and cool wargear to play with – if you compare the Ironclad Dreadnought to the Furioso Dreadnought and the Vanguard Veterans to the Veteran Assault Squads, you can sort of see where the ideas were coming from. So, everything in Vanilla world was good and that’s okay as every fan deserves a Codex he’s happy with.
However, some Vanilla players reacted to Blood Angels players’ attempts to unify the rules with utter refusal. Obviously, the new Vanilla Codex was theirs and nobody else should have a part of it as this would endanger them feeling special anymore. When a Blood Angels player vented his frustration over at Librarium Online about Blood Angels Stormshields still being a 4+ INV save rather than a 3+, he was corrected by a Vanilla player that this differences are necessary for balancing reasons. Yeah, right. When there were rumors about a new Codex: Blood Angels in 2010, people commenting over at Bell of Lost Souls already know how broken it will be. The truth is, the Codex Blood Angels can be considered broken right now, but not in favor of the Marines in red. There’s a list of challenges a Blood Angels player has to think of if he wants build an army list that is as efficient as a Vanilla list.
Since the Blood Angels have been confirmed for April 2010, we will see a few types of players come into focus:
I will play anytime with a happy Vanilla or Blood Angels Veteran. I will also play anytime with a Blood Angels newbie who wants to commit himself to this army because he likes the Chapter’s fluff and background. However, I won’t have much patience for unhappy whiners. Everyone gets a little jealous every once in a while because the time frame when one’s army is the latest fad is relatively short. If you let that dominate your game, you’re missing a whole lot of fun. All the Space Wolves models that will be left unpainted when the Codex: Blood Angels arrives will speak for themselves.
Posted by Parcival at 11:57 No comments: